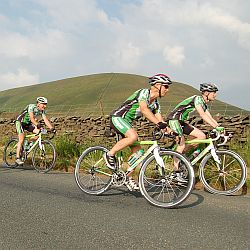 7th August saw over 300 cyclists take to the hills and conquer the tough climbs and descents that the cottages4you Pendle Predator Cycle Challenge had to offer. "It may have been brutal climbing over 11,000ft in total but it was also beautiful" said Pennine Events Director Mark Sandamas, who was one of the successful riders.

The exceptional countryside of Pendle, Bowland and the Ribble Valley formed the backdrop as the riders, who had come from as far afield as Scotland and the south-east, covered much the same ground as tackled by pro riders on last years' National Road Race Championships.

Nick Rudge of cottages4you was also amongst the riders and said: "As a sponsor for the fifth year running, we have seen the Pendle Predator Cycle Challenge go from strength to strength and this year was no exception. It was fantastic to see so many people take part and make the most of Pendle's beautiful surroundings. We were delighted that the cottages4you team had 16 members this year including myself, other members of staff and family. As a local business we are proud to support an event that attracts thousands of visitors to the area and this year was another resounding success!"

For those who were not so keen on saddling up, local construction company, the Eric Wright Group also got on board with Pennine Events and Pendle Borough Council and supported a FREE cycle show that ran alongside the cottages4you Pendle Predator at Rolls Royce Sports Ground, Barnoldswick. Whilst the riders headed off out and around Pendle and the Ribble Valley, friends and family relaxed and experienced all the village had to offer, including; exciting stunt displays, circus skills, pedal your own sensational fruit smoothie kept people entertained throughout the day whilst a masseuse proved very popular easing tired limbs.

Mark Sandamas, of Pennine Events remarked "Pendle is a superb base for cycling as also shown by last year's National Championship. It's been another good year for the Festival as it continues to see more people cycling more often"