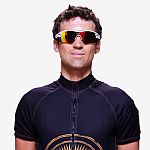 Team UK Youth have announced that experienced Welsh rider (and TV star following his recent presenting role at the Tour of Britain) Yanto Barker will join their squad for the 2012 season.

‘'I'm very pleased to have signed for the UK Youth team," said Barker.

"As well as feeling an affinity with the charity and its purpose, I'm excited to be racing back at an international level with riders like Magnus Backstedt. He's been an inspiration to me for years, ever since I first met him in 2004.

"The prospect of racing with a solid team led by him, along with the support of one of my childhood heroes, Nigel Mansell, means that I'm looking forward to next year more than any other. I can't wait!''

In 2012, Team UK Youth will aim to build on their positive performance in their inaugural season, and the addition of former Great Britain international Barker is sure to help the team match these aspirations.

"We are really glad to have a rider of Yanto's experience and calibre joining the team for 2012," said Magnus Backstedt. "As the team grows and we look to being competitive in Europe, Yanto's experience on the scene is really going to benefit us. He is a great role model for young people and will help power the message of UK Youth."

Founded in 1911, UK Youth is a leading national youth work charity supporting over 750,000 young people, helping them to raise their aspirations, realise their potential and have their achievements recognised via non-formal, accredited education programmes and activities.