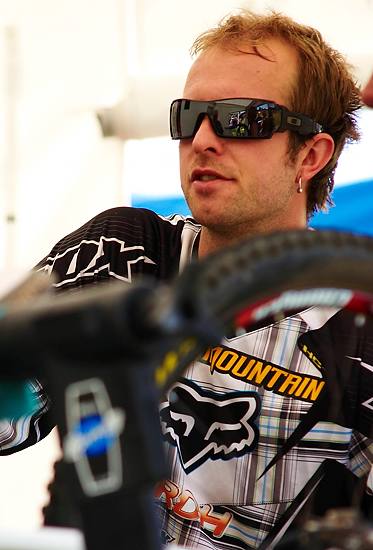 Interview with Scott Beaumont - Racing In The Blood - September 2009

A double World-Champion at BMX, racing internationally before most kids were off stabilisers and now a fourcross specialist and Freecaster commentator, Scott Beaumont has every angle covered and is the pros pro. To find out all about Scott read his feature-length interview - Racing In The Blood, and get the latest on his 2011 preparations right here.

Happy New Year to you all! I hope you had a great festive time and you’re fresh and getting into 2012 already. Christmas for me was great this year. I did not go too crazy and kept the snacks and nibbles to a minimum! Loads of great family time and decent weather made it a really good week.

Well 2012 has started fantastic for me. I have just signed a two year deal with Yeti Cycles and formed a new team – ‘Yeti Racing UK’. This was a huge move for me after being with Rocky Mountain for the last six years. A new opportunity came about and the chance to ride for Yeti was just too good to turn down.

Right now my training is really revolving around a lot of time in the gym and riding new Yeti bikes and getting used to them. My training has been going very well since October with plenty of XC riding, road rides and vitally loads of time on Redditch and Birmingham BMX tracks working on my gates and techniques.

2012 is going to be a great year for fourcross. Chris Roberts and myself have set up the new fourcross ProTour series that will be replacing the World Cup. There has been a lot of interest in the series and we have full support from the riders and organisers so we see 2012 as being a fresh start for what I feel is one of the most entertaining cycle sports in the world right now.

In other news, last weekend saw the introduction of the DMR Pump Track Challenge to the London Bike Show. The event went down a storm with both riders and spectators and the great news is we will be back in 2013. It was my first ride on the Yeti, and I had a fun weekend. It was great to be at a bike show and racing again after a few years out.

So that’s all the news right now. I will be updating this blog in the next couple of weeks with some more riding pictures on the new bikes.