Elinor Barker began the competition claiming gold in the Junior Women’s Individual Pursuit in the European competition. She qualified fastest in the morning heats to face German rider Anna Knauer in the evening final. Barker was victorious with a time of 2:25.725 and claimed the European Junior Women’s Individual Pursuit title.

Amy Roberts also put in a personal best in the Individual Pursuit, with a time of 2:30.560, but as competition was increasingly tough she finished in fifth place, just missing out on a medal ride.

Elinor was overjoyed with her European title, “It felt absolutely amazing to win the pursuit. I was so happy with my time as I was hoping for a low 2.26 at best and I came out with a 2.25.725! The standard had definitely improved since last year and the final was very intense as Anna and I were both so close for the whole thing.” 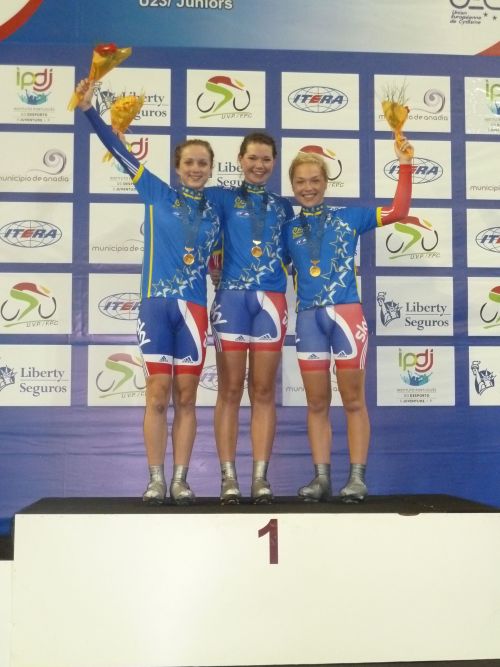 Amy Roberts and Elinor Barker then joined Lucy Garner in the Junior Women’s Team Pursuit. The women broke the British National record in the heats, qualifying fastest with a time of 3:35.292. This meant they faced Russia in the gold medal ride off.

The final was a nail biting event, with Great Britain down by 1.8 seconds at the half way point. But they managed to claw back time and win the title with a time of 3:33.921, breaking their own British record.

Amy Roberts was delighted to win the title, "Winning the team pursuit at the European Championships was amazing, cant explain how happy i was. We spent most of the race down on the other team (Russians) but we knew they would start off fast so we just had to do what we planned and follow what our coach (Matt Winston) was telling us to do. Even on the last two laps we were still down but we managed to pull it back and cross the line first. I honestly thought we hadnt got it as it was that close. So looking up at the board and hearing Lucy shout we won has to be the best feeling ever!! For something the three of us had been training together for all year, it was such a relief to get the gold medal."

U23 rider Becky James and sprint partner Victoria Williamson medalled early in the competition, with a silver in the Team Sprint. They faced Russia, the fastest qualifiers, for the gold medal, who clocked 33.678 in the final against the Great Britain duo who put in an impressive 34.687, almost three tenth faster than their qualifying sprint. 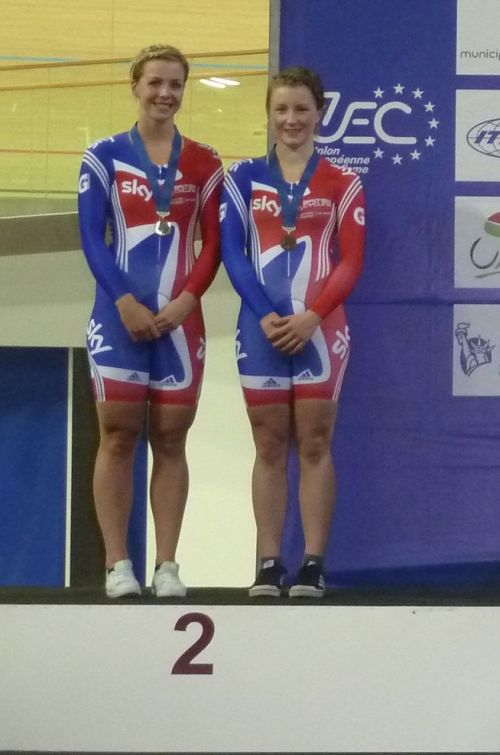 The medals continued for Becky James despite having knee problems during the competition. She took Bronze in the U23 Women’s Keirin and the U23 Women’s Sprint, where she was delighted to be back on the podium.

After winning two gold medals, Elinor Barker represented Great Britain in the Omnium event on Saturday. She just missed out on her third medal, finishing fourth in the competition. Amy Roberts also continued to perform well at the event, leading Lucy Garner out to win the European Junior Women’s Scratch Race title. She narrowly missed out on her own bronze finishing fourth, after a great ride by both athletes. Amy also picked up 10 points in the points race, finishing in fifth in the European competition.

Darren Tudor, Head Coach at Welsh Cycling has been watching the girls performance in Europe “Both Amy and Elinor did personal bests in the Individual Pursuit, which were great performances. Elinor is now the second fastest junior women Great Britain has ever seen over 2km. Her focus on the event enabled her to succeed and was a great stepping stone to the worlds at the end of next month and moving into senior ranks. . Both individual pursuit times were evident in their Team Pursuit success, where their understanding of the event scheduling, decision making, team work and discipline helped them achieve gold.

A busy schedule meant Elinor went into the omnium a little tired, but at Junior level the experience gained in an Olympic discipline will be invaluable to her. Amy also held her own in the bunch races and got stuck in. Unfortunately, she didn’t medal in these events but again the experience at this level is invaluable. Both girls have great prospects for the future, but there is still a lot more to come.”

The medal haul by Welsh cyclists assisted Great Britain to finish third in the medal table, just one medal behind Germany in the European Championships in Portugal.