A Chepstow Comprehensive School pupil has put herself in the frame to compete at the Commonwealth and Olympic Games, after her talent was spotted at a Sport Wales 5x60 track cycling session run by Monmouthshire County Council.

Despite it being her first attempt at track cycling, 15 year-old Ellie Campbell was encouraged to take part in UK Sport’s Power2Podium programme with Welsh Cycling, as part of their search to unearth the sporting stars of the future. 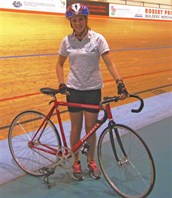 After impressing coaches at Welsh Cycling and passing a series of speed and power tests, Ellie was chosen out of 1000 other applicants to be part of the Power2Podium elite training programme, a programme that uses the latest sports science, technology and coaching expertise to unleash the sporting potential of future athletes.

“I would hope someday to be selected to compete for Wales at the Commonwealth Games, or even Team GB at the Olympics” said Ellie, cycling’s new talent, “but for now I will be focussing on this great opportunity, going through the testing process and seeing what I can achieve.”

Ellie will kick off 2012 with coaching and support from Welsh Cycling as they continue in their preparations for medal-winning success at the Glasgow 2014 Commonwealth Games.

“We want to build a solid base of talented riders here in Wales and working with the Sport Wales Institute and the UK Talent Team on programmes like Power2Podium has helped us to identify potential riders that may have otherwise gone unnoticed. We need to sustain the success that we’re currently witnessing from the likes of Becky James and we particularly want to unearth female sprint riders that will continue to represent Wales on podiums around the world.”

As part of a bid to get every child hooked on sport for life, Sport Wales is encouraging youngsters to take part in five, 60 minute sessions of extracurricular activity every week through the 5x60 programme.  Motivators, like Noel, are working in almost every school across the country to provide opportunities for them to take part in both traditional and non-traditional sports.

“We’ve taken around 70 pupils to the Velodrome over the past two years, so for Ellie’s potential to catch someone’s eye through 5x60 is just fantastic.Getting through to the Power2Podium programme is an amazing opportunity and achievement for Ellie. She has been viewed as a promising prospect for future Commonwealth Games and the 2016 Olympic Games and, with the training and support offered to her by Welsh Cycling, will hopefully be able to achieve her dreams.”

“It’s really encouraging to see that the 5x60 programme and our efforts to get every child hooked on sport for life are paying off. For a young person to be given the opportunity to not only try a new sport, but then be given the chance to excel in that sport and go on to represent her country on the international stage is phenomenal, and something that we want to see a lot more of.”