Geraint Thomas MBE has been named by the (BOA) as their 2011 Olympic Athlete of the Year for Cycling. The award was introduced in 2005 to mark the BOA’s Centenary Year and the success of London being awarded the 2012 Olympic Games. Each of the 33 summer and winter Olympic sports is presented an award for their top performing athlete that year.

"If I am honest, it's a massive shock to receive this great award! But it is also a massive honour. The way cycling is at the minute makes this an even greater achievement. It is really nice to get some recognition for all the dedication and hard work we put in day in day out." Geraint Thomas MBE, on receiving his award today. 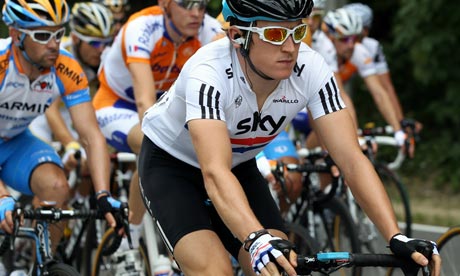 It has been a very successful year for Geraint on the road, wearing the white jersey during the Tour de France, finishing in the top 10 at the Tour of Flanders, taking Bradley Wiggins and Team Sky to a win at the Criterium de Dauphine and being part of the unforgettable GB Cycling Team performance that took Mark Cavendish over the line in Copenhagen to become World Champion. He also completed a charity ride with his girlfriend Sara from South to North Wales to raise money for the Alzheimer's Society and Stroke association. After a busy 2011 on the road, Geraint is now on track to compete in London next summer.

Matt Cosgrove, Performance Director at Welsh Cycling congratulated Geraint on his award and achievements this year, “It is great to see Geraint getting recognition for all he has achieved this year with this award. Not only has he achieved success as an individual both on the track and road, but he has worked tirelessly for the other members of both Team Sky and the GB Cycling Team in the significant results they have achieved throughout the season.”