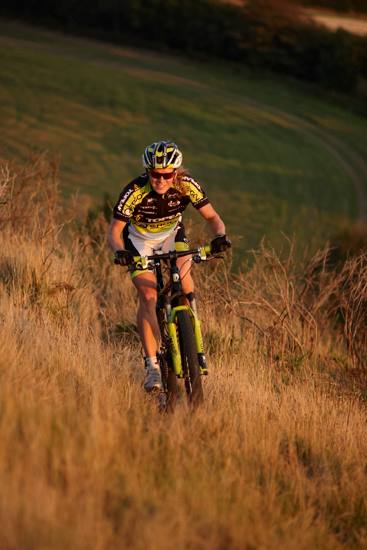 Racing for just four years but already ranked number two in the world for marathon, Sally Bigham has had an extraordinary rise to fight against the World elite. From balancing a full time job and racing, to taking on her first season as a professional mountain bike rider, every step of the way will be documented. To find out all about Sally read parts one and two of her feature-length interviews, and get the latest from her epic adventures right here.

A podium at the European Marathon Championships was one of my season goals and achieving it is really special.

It was a challenging course with lots of steep climbs and fast forest single trail descents - I really liked it :-)

The course was dry and fast during the week, but rain before and during the race made it slippery and muddy. It was important to enter the early single trail sections at the front of the bunch, so a fast start was necessary.

I rode at the front with Pia Sundstedt, Jane Nussli and Milena Landtwing; however on the first climb Pia and I were able to build up a 40 second lead. We rode together for the next 30kms and I was able to respond to Pia's attacks on the climbs, but eventually I had to let her go.

Over the next 30km I lost approximately two minutes to Pia, but I had a over six minutes on third position. I knew that I'd have to have really bad luck or do something silly to lose my lead and with several really steep, loose climbs to go and some really fun forest single trails I started to take the descents a little more cautiously because I didn't want to make any mistakes at this point.

This bit of extra caution was worth it and crossing the finish line in 2nd position was a really great feeling!