‘Youth bike racing doesn't get tougher than this.....'

The NWYT is the major Youth road racing event in the UK. With all the top UK riders and visiting teams from Belgium, the Netherlands, the Czech Republic, Isle of Man and Ireland the standard is high and the racing hard. Although ERC have had a few individual riders at this event in the past, this is the first year ERC/Martin Currie RT have taken a squad, complete with 2 coaches to give the kids advice and feedback. 11 riders - 8 boys and 3 girls made the trip.

The weekend started well as Endura pulled out the stops and we were able to pick up our new kit complete with our main sponsors logo. The riders and support team gathered at Hillend, piled the bikes into the vans, kids into the minibus and the convoy headed south to Blackpool for a pre ride of the Prologue course then on to the hotel for dinner and team talks.

Up early the next morning and headed back to Blackpool in convoy. Despite the slight hiccup of the minibus being stopped by the police to check it was not full of English skinheads looking for an English Defence League rally, we arrived at Blackpool prom in time for the 2km prologue. Getting out the van we got a blast of how hard this race would be. Gale force winds were battering the course, making bike handling and headway d 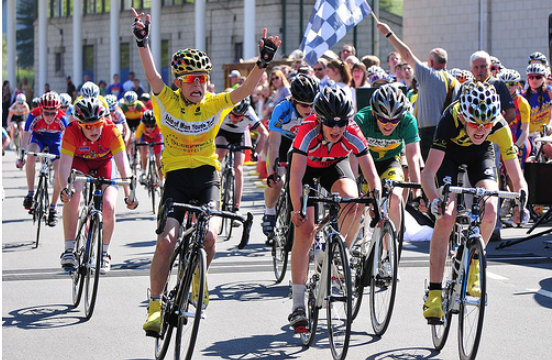 ifficult. The added complication of a very high tide meant that the organisers had cut short the Prologue for our youngest rider. Instead of the full circuit, they would only tackle the short, sharp climb from the lower to the upper prom. Sean took his place and produced and explosive climb to put him on the front row of the grid in the afternoon race.

The other age groups did the full circuit with leg speed being the key factor when the wind was behind, and strength on the return into the teeth of the gale. The kids were well prepared and performed well in the testing conditions. Unfortunately the club Easy Up took a bit of a battering. (Sorry to the ERC committee - it might not last the rest of the season....)

With a break for lunch the afternoon circuit races got underway and the real carnage began.

Under 16s Boys raced 35 miles, Under 16 Girls, Under 14 Girls and Under 14 Boys did 22.5 miles and Under 12s 8.75 miles. With the dreadful conditions the races were soon blown apart with any riders caught on their own rapidly going backwards. Mixed fortunes for the team. With Sean Noon and Hamish Carrick maintaining a position in the U16 bunch until close to the end, and Stuart Balfour finishing well up in the U14 Boys. Louise and Emma Borthwick lost touch early on in the U16 and U14 girls race but Lulu Bartlet hung on in the U14 girls for about half the race. All the riders got back to their rooms that night with very tired legs ready for a good meal and sleep. The support team all got back with severe windburn on their faces!

Next day there was some respite from the wind as we were on the Salt Ayre cycle race circuit in Lancaster. Each age group had 2 crits races to compete with a total of 36 miles for the U16 Boys, 24 for the U14 Boys and the Girls. From the off it was fast and furious in all age groups and with the circuit wet from overnight rain, crashes were inevitable. It took nerve and strength to compete and we were right up there in all the age groups. Sean and Hamish worked throughout and stayed in the bunch for the both races. Louise shook off her bad Blackpool result and was mixing it up with the leaders at the front of the girl's races. Our 3 strongest U14 Boys worked well in their races looking after each other and mounting attacks off the front.

Happy faces and tired legs at the end of the day - all through it safely despite crashes in every race.

The final day threw in another weather challenge - rain. Now at the UCLAN Cycle Circuit the U16s raced 30 miles, the Girls and U14 Boys 20. Again it took bravery, concentration and commitment to stay with the bunch. Tight corners, wet roads, close riding - crashes were a certainty and the ambulance was required in every race. ERC/Martin Currie RT jerseys were in the lead bunches again making attacks in both the U14 Boys and Girls races. Our U16 Boys were keeping company with the best in the UK. The support team were proud of every one of the team.

How did we finish? Our best result was Stuart Balfour 6th in the U14 Boys and we had riders in the top 20 in U14 Boys, U16 Girls, U14 Girls and U12 Boys, but more importantly the team learned that bike racing is not just about turning the pedals.

Long and short term preparation, kit, equipment, warm up and recovery strategies, food, sleep, concentration and the importance of teamwork were all lessons learned.
This trip was not just about a nice weekend away for these young riders, it was about building bike racers for the future. They did the club, their sponsors and their parents proud, but most importantly they went away with a determination to come back again next year stronger and better.

Cannot finish without the thanks - to the club and coaches Brynley and Gary, to Martin Currie Investment Management for sponsoring excellence in Scottish cycling, the Braveheart Fund for the contribution to travel costs and to the parents who travelled - they fetched, carried, bought lunches, fixed bikes and held the Easy Up up in the Gale force wind. Chapeau to everyone.

Full report on the event at:
https://www.britishcycling.org.uk/road/article/roa20110528-Report--North-West-Youth-Tour-0

and lots of our own photos at:
http://www.flickr.com/photos/ercmartincurriert/

Hopefully the riders will add their own thoughts on the weekend to this blog - but my favourite quote from our youngest rider, Sean Flynn ;