The men's Criterium takes place in the afternoon session (from 1515) at the Villa Marina. Jack Barrett, Grant Ferguson, Taylor Johnstone and Stuart McCluskey will all represent Youth Team Scotland.

Team before the opening ceremony

The lastest photo from the Isle of Man! Keep an eye on the website for more photos and reports, more to follow! 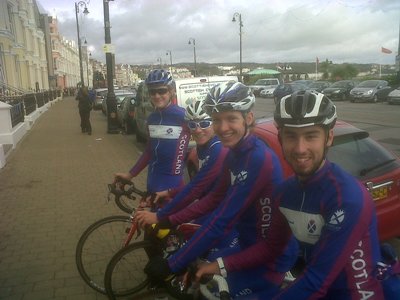 Scottish Cycling are pleased to announce the team of four cyclists selected to compete at the Commonwealth Youth Games in the Isle of Man on the 7th - 12th September.

Jack Barrett, Grant Ferguson, Taylor Johnstone and Stuart McCluskey will travel to the Isle of Man with team coaches Graeme Herd and Mark McKay to compete in the 5 day competition alongside another 46 athletes from 6 other sports.

1000 athletes will descend on the Isle of Man representing 69 of the 71 commonwealth countries for a week of fierce and demanding competition.

Congratulations and GOOD LUCK from all at Scottish Cycling.