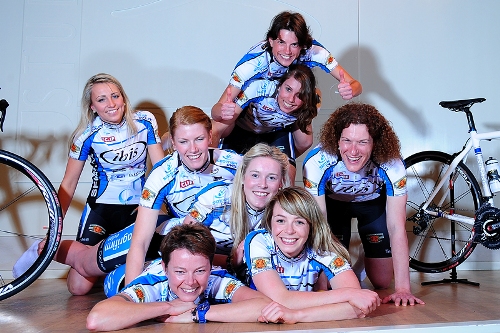 From the 25th of April until the 29th of April the team will participate in the Gracia Orlova stage race in the Czech Republic. This race, rated UCI 2.2 is held since 1987 and previous winners were amongst others Hanka Kupfernagel, Judith Arndt, Trixi Worrack and Marianne Vos. The 26th edition of this race consists of a prologue (a timetrial of 2,2 km), a time trial of 26 km and three road races. Representing Team Ibis Cycles will be Esther Olthuis, Jane Barr, Julie Leth, Laura Trott, Martina Thomasson and Pippa Handley.

The Gracia Orlova stage race started today. (26th April) The 124 riders began with a prologue over 2,2 km through the streets of Havířov: 1 km in one direction, a turn and some corners and then 1 km back to finish.Laura did the course in an amazing time of 2 minutes 50 seconds. A time that put her in 5th place overall, only 3 seconds of winner Ellen van Dijk, and second in the U23 classification.

So, a good day for the team and for team leader Graeme Herd who will be in car number 3 tomorrow.

Today’s race was a tough one; going over 105 km, with lots of climbing and between km 40 and 60 a long climb plus the race finishing on a steep cobbled climb. In her battle to become the best U23 rider Laura got one bonus second at the first sprint, before the real climbing started.

At the end of the stage a group started on the last climb with three Ibis riders in it: Laura, Julie and Esther. At the finish the time difference in this group were over a minute. Laura finished 29th at 17 seconds from stage winner Evelyn Stevens. Julie finished 50th and Esther was 65h. In a following group Martina finished 80th and Jane was 87th. Pippa did not finish the race.