Alpine Bikes Racing has been officially launched at the TISO Glasgow Outdoor Experience. The elite cycling team is a joint venture initiated by Rab Wardell with conjunction with Alpine BIkes.

Rab Wardell is an elite level mountain bike racer living in Glasgow, Scotland, and is a multiple Scottish and British medallist. Rab’s primary aim is to qualify for and compete in the Glasgow 2014 Commonwealth Games, and to do so, he is looking to return to competition at the highest level in the UK and ultimately in UCI World Cup. Rab gets his competition program underway on the 9th of March in Israel where he will compete in four UCI Class 2 cross country events over ten days, before returning home to compete in the British Cross Country Series, selected UCI and SXC events.

Speaking at Alpine Bikes, Glasgow TISO Outdoor Experience, Rab said ”I’m really excited to be competing for Alpne Bikes Racing in 2012. The team and sponsors offers me the opportunity to compete without compromise. I’m confident that I have the best clothing and equipment which the guys at Alpine Bikes will keep running perfectly all year. I’m extremely motivated and proud to be taking Alpine Bikes Racing forward and I hope to encourage and inspire others to try cycling through acting as an ambassador for cycling at home and abroad” 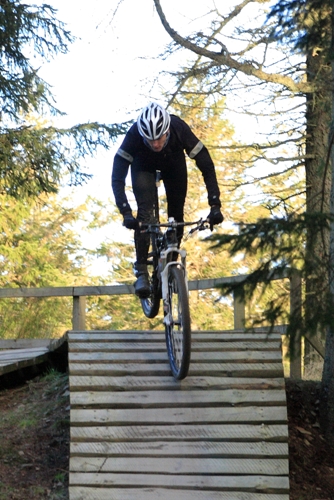 Bryan Shedden, Director of Alpine Bikes added “Alpine Bikes is very excited to be supporting Rab Wardell and the creation of Alpine Bikes racing. When Rab approached us last year with his detailed sponsorship proposal we saw this as an opportunity to support a Scottish athlete with huge potential. His proposal appealed to us as Rab competes in various cycling disciplines at competitive level, as well as aiming for a place in the Scottish team in the 2014 Glasgow Commonwealth games. We are looking forward to working with Rab and his other sponsors”

Rab is also working in partnership with Morrocco Media to release an online webisode series covering his return to serious competition and the series of films will be posted on the Alpine Bikes Racing website. The first webisode, covering preseason training at The Bike House in the Tweed Valley will be online this week