I bet the title got your attention?

Scotland has a rugged beauty which sets it apart from the rest of the UK and while Mountain Biking has flourished using the abundant trails that have been established, the more Lycra clad road going brethren continue to share the public highways with an ever increasing traffic load.

Finding safe environments away from combustion engines to race or train, has meant thinking out of the box. In particular the under 16s are a vulnerable group, who by the rules laid down by British Cycling, can only be coached or raced on closed circuits, and so seeking out places to do this has led to some very interesting and unique venue usage.

Muirkirk is a village in the wilds of South Ayrshire. It is surrounded by rolling hills, turbines and sheep. However nestled in the valley just outside the hamlet is a wee gem. Next to a Golf Course, an under utilised carting track grandly named Kames Motorsport Complex, is a piece of tarmac heaven: glass smooth 800m long and just wide enough to have 4 or 5 bike riders wedged across it. 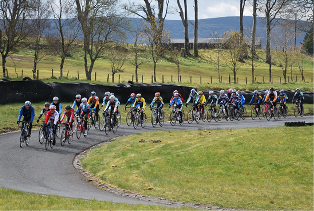 British Cycling's Talent Development Coach for Scotland Mark Young, had negotiated a private hire of the track from the enthusiastic club members who run the facility, for his first Circuit based Scottish School of Racing. 24 young people aged 13-16, who had been nominated by their clubs, came from the four corners of Scotland, descending on the quiet rural countryside, while curious local golfers and residents scratched their head wondering what circus had arrived in their sleepy town.

The basic idea of the British Cycling Talent Programme sessions are to develop further the young people who are part way through their lifetime as cyclists. They have been invited to come along after being nominated by their clubs and the coaches who work hard with them, since they showed many of the necessary qualities it will take if they wish to progress in the cut and thrust of bike racing, but particularly road racing.

A team of Club Coaches, Sarah, Andrew, Archie, Mark and Kirsteen, were also invited to attend, to help with all of the roles and responsibilities that go along with running a coaching day, and also to continue their professional development, but what was most encouraging was the makeup of the coaches: male and female, young and old(er), experienced and novice, and they gelled as a team and got stuck in to the whole day with great enthusiasm.

A pre-event sun god offering appeared to have been accepted, as all day long the rain and wind stayed away, although it is fair to say, everyone had come along well prepared for a more typical Scottish spring day. This preparation thing, was actually part of the process that the British Cycling Talent Programme wanted to layer in to the personal responsibility the young people attending should exhibit. At aged 13, it is time to take more control of your bike riding, leaving mum and dad to relax a little more, safe in the knowledge that little Johnny had learned what to do and could do it without any adult supervision. For some this was a wakeup call. 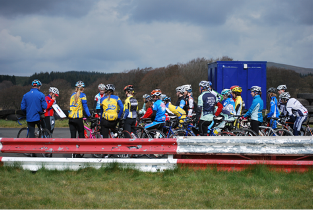 Say nothing, do nothing, get nothing.

The scene was set at the briefing, where Mark explained, that the point of the days' session was to help these young riders to develop 2 key qualities. Discipline and Finesse.

Not the discipline your parents give you for a lack of thought, or even the type of discipline a teacher at school uses to ensure a common learning environment, no sir, its the discipline the Pros show on and off the bike: wearing the right clothes for the conditions, drinking and eating enough during the sessions, having the tools to fix mechanicals. It's also about bunch discipline: staying alert at all times, keeping the gaps between wheels, selecting the right gear for the terrain. Essentially establishing a set of good habits to get the most out of bike racing. Very important when you are young and malleable.

Finesse is such a beautiful French word. It describes the delicate, skilful and subtle handling of situations, and in the context of bike racing, an analogy was used to help the teenagers listening, understand how finesse related to their actions.

Take some piano players and add a scale, put a gorilla at one end and a concert pianist at the other. While the large primate is making a great attempt to press the keys to elicit beautiful sounds, he is in fact making a complete hash of the actions. On the other hand, the concert pianist is making listeners cry for joy as they make the sounds tickle our ears into submission.

In order to make this analogy stick in the minds, two volunteers were asked to play the roles and various Professional bike racers names were given by the audience to show at which end of the spectrum they sat. All agreed that Messieurs Cavendish, Merckx and Cancellara all sat up at the concert pianist end. While Mark, not wishing to be too disparaging to his charges, suggested they were more akin, for now, since the point of the session was to develop, to the Gorilla.

As crazy as it sounds, youngsters love this kind of stuff, especially if they are heavily involved in the process. They were now looking at modifying their behaviour, learning to become more complete bike racers, with discipline and finesse at the top of their agenda. 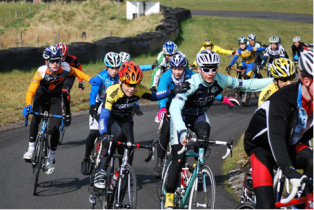 After letting the parents make a hasty retreat, the group began their 50 mile, lap after lap bike ride. They were on their own, able to feed, drink, fix a mechanical and make decisions all by themselves....... well, except for the team of coaches leading the session.

On the menu was bunch riding, taking advantage of the large group and tight track to put them young gorillas, as they shall hence be known, into awkward challenging spaces and asking them to not only stay in a straight line and keep position, but to also get them to attempt more advanced skills which they will need when they come up against quality opposition. Being very close to one another in a bunch of 50 or 60 while racing at high speed, takes confidence in your ability and a level of trust in those around you, and practicing this in a relatively safe environment begins the process in a more relaxed way. Adding to their 'situational menu' is vital to help them cope when they are thrown into competition, and if as coaches and clubs, we don't simulate the racing environment enough, then the young athletes will be under prepared to compete.

The pace was well controlled by our top Coach Gorilla Archie, making sure everyone got the chance to respond to the many orders being barked out from Mark as he rolled round, cheekily/handily taking shelter at the rear of the bunch.

How do you pick up a skill? You've got to repeat it lots and lots of times and so again and again the shout would come, until the coaches were satisfied an improvement had been made.

Time passed by so very quickly that some parts of the plan became a bit time sensitive, meaning lunch would be a little later, but no one complained, they were too eager to learn, and were fuelling as they rode, so when Mark called them off the track, they did so with reluctance.

As always with a group of confident teenagers, the banter is great, and lunchtime was filled with mind melting chat about the latest going on in their lives.

Once the short break was over, brains were re-engaged, ready for the next assault on their senses. A shorter circuit was devised, so that the next part of the session plan could develop under the coaches watchful gaze. One particular Achilles heel for many many bike riders, is cornering, whether solo or in a group, and if you don't learn fundamentals early enough, then keeping bunch position or maintaining your speed become much more difficult to do. The artificial scenarios that were put in place by Mark and the coaching team, made all of the riders learn and take away more personal tips to improve their weaknesses. 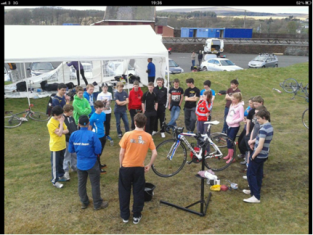 Just as the sun was waning, it was time to wrap up the bike riding, and prepare for the last part of the day, a workshop on bike washing. A crowd of interested parent observers, mostly dads, appeared on a grassy knoll just far enough away to hear, but not to intrude.

Bike maintenance is a highly personal affair, with many ways of lovingly caring for your machine. The workshop content set out to give a basic set of instructions, including the equipment required and the importance of attention to detail, from which will evolve their own personal bike wash routine.

As 5pm approached, and a chill came on the light winds, it was time to wrap up the days activities. A short debrief, thanking everyone for being such willing participants, and asking for their continued hard work in the coming months and years, and it was time to close the boot of the loaded to the max vehicle, set the SatNag for home and say a big thank you to the coaches, to Kenny Steele for the photos and especially to Ian, from the Motorsport Complex. Job done.

With the aforementioned thinking out of the box, collaboration and negotiation, more Scottish Schools of Racing will appear on the calendar, ready to continue the great work the youth clubs are doing with the new generation of cyclists. I can't wait.