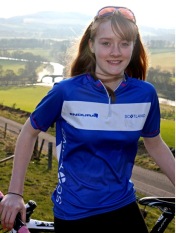 Ever since I was young, I’ve enjoyed being active and competing in various sports including running, triathlon, hockey and netball. As I come from Peebles my cycling career naturally started with mountain biking in Glentress when I was about 8. However after trying road racing, I quickly switched discipline as I found the speed of road racing much more exciting. I then had the opportunity to try track racing in Manchester in the BC Regional Schools of Racing and became hooked on riding the boards! Having the new Sir Chris Hoy Velodrome for track league and weekly coaching is just brilliant.

I also play netball at quite a high standard and our team is very successful but I’ve decided that I want to pursue a career in road and track as its a lot more challenging, enjoyable and it’s a lot more satisfying when you have achieved something such as a win or an improvement or a goal.

I have moved from Youth to Junior this year and know this will be a big challenge along with studying for Highers, but I am really enjoying the increased coaching & training workload under the guidance of the SC Coaches and I’m also really excited about being part of the Scottish Junior Development Squad.

Who inspires you and why

Great coaches like Alan Denman and Tim Buckle who have taught me so much, Iljo Keisse, who was in my team at one of the Revolutions, because he is a great track rider but is as shy as me and also because of his amazing finish in Stage 7 of the Tour of Turkey in 2012 (just Google it!)