If there was ever any doubt that the Olympics would have any effect on the increase on children wanting to get involved in the sport, It wasn’t being felt in South West Scotland.

The region has been making the most of the excitement surrounding the build up to the event and now it’s in full swing, there’s no holding the kids back.

Scottish Cycling in partnership with the Dumfries & Galloway council have have been running a three month build up to the games with the Dumfries & Galloway Active Games. This has involved heats in all the regions cluster groups of primary schools in events that will be based in the Olympics. The cycling events have taken the form of the newly introduced Omnium competition, helping to give the youngsters a better understanding of the discipline when they watch it for real in the Olympics.

The winners of each heat have qualified for a grand final to be held in September to keep the interest going right into the Paralympics. 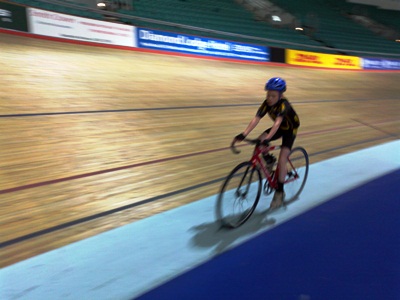 The region also held a four day Track school for newcomers to the sport. The first three days being held at the Everholm running track in Annan and the final day giving some of the youngsters the chance to ride at the national cycling centre’s velodrome at Manchester.

The Track School proved so popular that it was vastly oversubscribed everyday. On day two the youngsters also got the chance to grab their 15 minutes of fame when both local television and radio crews turned up to film and record the massive interest in the sport that’s been generated.

With the regions clubs never looking stronger, there’s never been a better time to get involved.

If you’d like to have more information on your local club please contact Scottish Cycling’s regional development officer Alan Denman at alan.denman@scottishcycling.org.uk