For the past month a selection of Scottish Juniors have been racing abroad in the Basque country. On the 29th of june Aidan Quin, Aryton “Posture” Pellet, Connor “Kevin” Telfer, Kyle Petrie and me, Gavin “Disgrace” Shuttleworth boarded a plane destined for Bilbao to take part in an exchange with Beste Alde, a Basque racing team. 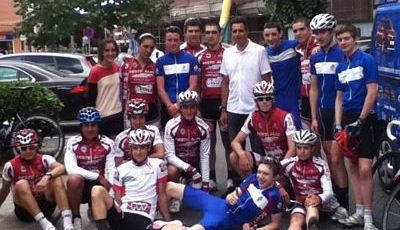 Later joined by Tom Arnstein, we stayed with local families and raced throughout the Basque country.  Our typical pale Scottish skin didn’t have much time to acclimatise as we had a race the first weekend of our stay. A gruelling 90 km road race over a fewvery tough climbs was what faced us and I am proud to say that our team did very well, covering every single move and always having a presence at the head of the race. Thinking I was David Millar, I decided to put a late attack in with 4 km to go, and despite having a 15 second gap and it looking a wee bit promising things didn’t quite work out and I was caught by the “umpro team lead out train” with 1km to go. And so it was left to Aidan and Ayrton to contest the sprint, who both did well to finish in the top 15.

On the first Thursday of our stay we started the mighty Tour of Bizkaia, one of the tougher stage races on offer to juniors. With a healthy Tom Arnstein now in the team, just back from illness, I was “absolutely buzzing” to be standing on the start line with my team mates. However, it would be an understatement to say that the racing was a shock to the system. Immediately I was finding the going tough as numerous riders were shelled out the back on the very first climb. The Scottish riders dug deep till the very end with Ayrton finishing in the main bunch of 40, me a minute down and tom just behind. Kyle Petrie was determined as always to finish and finished inside the time limit. Unfortunately we lost two pairs of strong legs, Aidan had a mechanical and was unable to finish whilst Connor was still finding his legs after illness.

Throughout the remainder of the race the Scotland team became stronger and stronger despite unfortunately losing Kyle on the second day. I spent most the time off the back, chilling with the boys from the broom wagon but Tom and Aryton did well, finishing higher and higher up the standings every day, Tom capping off the tour with a beast ride on stage 4, bonking on the final climb but still managing to finish in the top 30 guys on a very mountainous day. Unfortunately on the same day, Aryton crashed out in dramatic style on a descent, hitting a brick wall but being the tank he is, he was up and about in no time.

After a week of tough racing we had some time to relax, most of which was spent on the beach, on Cameron Balfour’s facebook or at Stuart Mccluskey’s flat watching movies (Stuart Is currently living in the Basque country)

We still had a few one day races remaining. There was some controversy when train crossing barriers came down mid way through a race and a group of 20 riders decided to nip by them. The main bunch, including me and the other juniors, sat up thinking the race would be neutralised. It wasn’t, 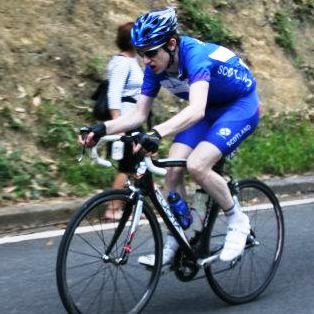 however there was nothing to fear  as there was a Scottish presence in the break in the form of sneaky Stuart, who had “done the booster” across the tracks and gotten into the move. He was aggressive as always towards the end of the stage and earnt himself a top 15, resulting in the guest of honour Miguel Indurain saying he had had a great race.

The next weekend was our final two races. Saturdays race was a tricky one, a large break went up the road with Aryton in it however we had made a school boy error and didn’t get more than one man in the break containing 20 or so riders. We all made efforts to bridge the gap in the final stages of the race, a group of 6 containing kyle, connor and I attacked at the foot of the final climb. I moved clear of the break in search of fellow team mate Aidan who had also attempted to bridge the gap. After catching him we both turned our attentions to thinning out the size of our break away group , containing riders who had been spat out the back of the group at the front. Aidan smashed it up the small rise to the finish line, only one rider could stay with us. We then took it in turns to attack the rider before I got away in the final km. Aryton finished in the top 15, managing to stay with the break, a good display especially considering he was recovering from crashing into a wall…

The final race was our last chance to win a race. Me and Aidan, aka THE DREAM TEAM covered every single move that went up the road, hoping that something would stick whilst the other guys waited for their moment to pounce in the latter stages of the race. Thinking I was properly in with a chance of winning I stayed in the front 15 all day, however disaster struck. A slow change of a rear wheel puncture put me out of the race. I had no worries though as I knew the Scotland boys would still be smashing it up. Connor  was buzzing to have his old legs back after illness and made his presence felt at the front along with Aidan. On the final climb the pace was savage and a small split in the group opened. Aidan and Connor chased as hard as they could, possibly trying to set something up for Aryton, and it was looking possible with the gap coming down to just 20 metres or so. It wasn’t to be though, despite the teams best efforts the gap was never closed and unfortunately Scotland never got its win in the Basque country.

The final week was filled with “touristy” activities. We treated ourselves to a few trips to Bilbao, a few Ice creams and finally a massive dinner at an all you can eat buffet. It was a great way to finish off a great month of training , racing and “holiday shanagins”

Heres what the other riders had to say about the trip

“Our trip to the Basque Country was a fantastic experience for me as my first time racing abroad. I felt a good mixture of both excitement and apprehension. I took a while to settle into the racing but soon I was really enjoying pushing myself to my limits and learning a lot about bike racing!”

“"it was great seeing my Scotland mates racing in the Basque country the way they did and id love to see this exchange continued on for years to come. All i can say is if you weren’t here , you missed out…”

“The tour of bizkaia was a really good experience racing in such a large, decent quality field. Good fun staying in the same town as we could all meet up after training which made a nice change”