The 2016 Junior Women’s Road Race was won by Eleanor Dickinson of Drops RT’s development squad after a grueling 63-mile battle which saw the riders climb the iconic cobbles of Michaelgate eight times, amongst their senior counterparts at the Lincoln Grand Prix.

Dickinson, a strong pre-race favorite along with Jess Roberts (Liv CC/Epic Coaching) and Sophie Wright (Renvale RT) broke away on the final climb, the three juniors having stayed largely within touching distance of each other throughout the race.

Any notion that Dickinson’s strong Drops senior team-mates might be working for their younger member were quickly eschewed on a circuit where the technical challenge of simply getting near the front every time the narrow, steep climb to Lincoln’s historic old town square meant any race within a race tactics were virtually impossible. 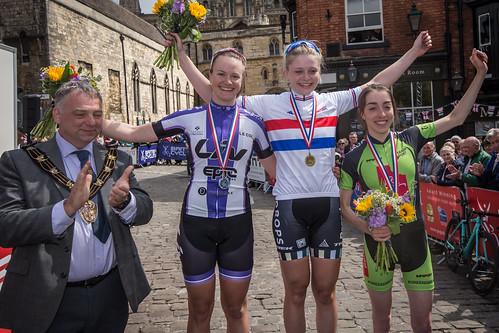 Riders unable to hold station near the head of the race quickly found themselves minutes behind the leaders on the climb, in danger of being swept up by the broom wagon whose instruction of sweeping up anyone more than five minutes off the pace of the leaders, meant the race was a constant battle to stay ahead of the clock.

An early casualty was one of the strong contenders, Louise Surridge of Ford EcoBoost, who came down in an early crash approaching the climb for the first time, an incident that brought a number of riders down and typified the nerves as each lap the riders jockeyed for position. Surridge re-mounted but her race was effectively over.

The three leading juniors rode impressively towards the front of the peloton for the entire race, constantly marking each other and mindful of each other’s positions in a tense battle of wits.

All three benefited when Dickinson’s Drops team-mates started to dominate the race from the head of the action launching attacks and counter attacking breaks after the opening couple of laps.

“It was really tense in there early on,” explained Dickinson, who also held the national jersey at youth level a couple of seasons ago.

“Then when the moves and counter moves started going off at the front I settled down a little when I knew we [Drops] had riders in the break and we could just sit near the front of the main bunch and concentrate on our own race.”

With the leading seven riders duking it out on the final ascent for the senior win, it was clear that the juniors’ would be a straight drag-race up the cobbles to the finish. And so it proved, as entering the narrow street for the final time all three were riding abreast and looking at each other to see who would go first.

Dickinson prevailed at the top in a close finish from Roberts, little more than a bike length behind at the line.

“The climb was a bit punchy for me,” revealed Roberts who was nonetheless happy with second place. Sophie Wright came in shortly after in third. Having taken gold in the European Junior MTB Championships seven days previously, Wright is a formidable talent as a first year junior as she also holds a cyclo-cross national jersey and now the silver medal on the road.

With all three junior medalists finishing inside the top 10 overall from a field of 110 starters on one of the most demanding British Cycling Women’s Road Series events on the calendar, the future looks bright for junior women’s racing.