The Performance Cycles CMI U23 team was launched on Saturday at the title sponsor’s HQ in the Cotswolds. 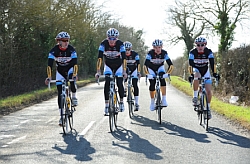 Team Manager David Walters commented, “Without the foresight and generosity of our sponsors, the whole programme wouldn’t get off the ground. Our partnership with Performance Cycles and the French based Elite team CMI, will enable us to compete at the highest level possible as we look to develop the careers of these talented young riders.”

Alongside the top-end U23 team, the Performance Cycles club and multisport teams were also launched, providing a real pyramid structure and opportunities under one banner. The following day, the team competed in the Severn Bridge Road Race with mixed fortunes.

On a very cold, wet and windy day, and facing a strong field, Conor attacked 1st time up the hill, easily winning the prime and forcing an early split. Unfortunately a rider came across him once passed the HQ took his front wheel from under him, ending his race right there. Al suffered a puncture after only 3 miles, and with no neutral service, he too was out early.

Todd however was riding strongly in his first race of the season. Despite missing the decisive 9 man break, he finished a very creditable 12th, easily beating some ‘names’ from bigger teams.

This is a very good sign of things to come, in the very long and varied season that lies ahead, including The Challenges des Phosphates, 3 UCI 1.2 races in Morocco in April.