After a highly successful debut year in 2011, which saw the team take 15 victories and an additional 42 podium finishes across the UK and Europe, the 2012 season is looking even better for the For Viored Racing Team.

The major new signing of the season is Sarah Storey, who after a very successful week at the recent Paracycling World Championships in Los Angeles, in which she took two more world titles and an impressive silver medal in the team sprint, has now amassed a staggering twenty Para word titles and seven Paralympic gold medals.

About joining For Viored RT Storey says the following: “I decided to join For Viored RT because the team have a reputation for being at the front of UK races and being strong in a big variety of European Stage Races. My road season will play a big part in my preparations for London and the forward planning and organisation of the team make it the perfect team to work with. For Viored RT have an exciting roster of riders from former GB team mates to big UK talent and I am looking forward to racing with them.”

Other new riders joining the team include Katie Curtis, Claire Galloway and former junior European champion Alex Greenfield. All three riders have represented team GB at various points over the past few years and add even more strength in depth to the squad.

From last year’s squad, five riders remain. Rohan Battison was one of the revelations of the 2011 season. Having been active in cycling for a number of years, 2011 marked a huge step forward with the most notable results being a top 15 finish in the National Championships (her first ever ridden) and a 2nd overall in the Essex Giro stage race. Also staying are; Charlotte Coclough, Rebecca Curley, Gaby Shaw and Hannah Manley who will be competing in her first year as an U23. 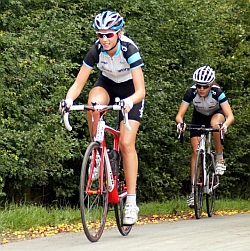 With a strong line-up, the team is ambitious, building on the success of last year. Firstly aiming for success in the British races, with the Bedford 2 day, Essex Giro, Tour Series and National Championships on the road and on the track being major targets for the season. Secondly the team will continue to build on its international programme returning once more to France and the Czech Republic to compete against the world’s best in UCI ranked stage races.

Although the teams sponsors will be announced over the next few weeks, both For financial consultancy and Viored have continued their support to the team for 2012.

For Viored RT line up: