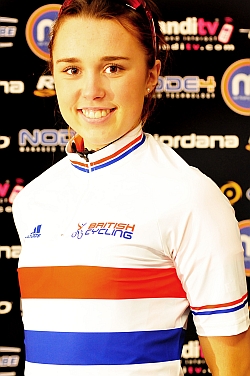 After a good season in the Motorpoint team, Hannah has made the switch to Horizon Fitness as she looks to further develop as a road rider and begin to score results in major races across the UK. Hannah took the win in the Coalville Wheelers Women’s Team Series in September ending a fantastic road season which included 15 top ten places. Only two weeks after the Coalville victory Hannah took the National Derny title on the track to kick start what will be a busy winter of track racing.

“Hannah’s one of only 14 riders in the UK holding an elite license and that shows her consistency. She’s a quality rider and I feel she can develop a lot and importantly I think she’ll do this very quickly” commented team Manager Stefan Wyman. “I’m also looking forward to seeing how Hannah can fit into the team and transfer her UK form into European races. It’s a big step up and challenge, but one I think she’ll handle well and furthermore I think it’s an environment she’ll thrive in.”

“I am really happy and very excited to join Horizon Fitness for the 2012 season. After having a great season during 2011 with my biggest win being the National Derny Championships, I’m looking at bettering it next year with Horizon Fitness. I aim to hopefully perform well in the Johnson Health Tech GP Series and also the teams European races. I’m going to carry on my hard work to ensure I give the team 100% and show them my potential, and I hope to show that with good results throughout the year. They have a great set up and I am very proud to be a part of it, especially during an important Olympic year.” Commented Hannah on joining the team.

“Hannah completes the 8 rider line up that we’ll have for 2012. It’s a very young squad which is a deliberate and exciting move for everyone involved. The all British squad has an average age of just 20 confirming the team’s goals of trying to develop young British talent” continued team manager Wyman. “The doors aren’t shut, but we’re very happy with the squad we’ve assembled and for the time being I can’t see anyone being added. But there are always exceptions and if top level riders from the UK become available”

The team will kick off events with a team launch in Stoke on Trent on 10 March 2012, and will then travel to the south of France for a training camp for 2 weeks ahead of the first races of the season.