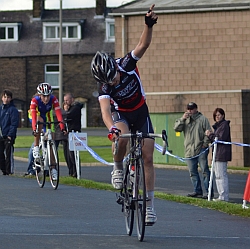 Two superb rides from new U16 signing Gabz Cullaigh (Pictured right) and U14 Joey Walker gave them two prestigious crowns at the end of a very successful season.

Aided by his RST Trigon team mates Josh Cutler and Struan McInnes, Cullaigh set a punishing pace from the start of the U16 race and the trio soon established an impressive lead. For the next 13 laps they worked intelligently and co-operatively in a tight breakaway group and lapped the rest of the field.

With 10 to go, and against a very strong wind at the top of the circuit, Cullaigh launched a telling attack and got himself 20 metres ahead going into the tight corner before the long downhill section. McInnes was clearly caught off guard and did his best to make up the lost ground, but to no avail. Cutler responded valiantly and for a couple of laps gave chase. At one point he dug really deep and looked as though he may be able to get across, but Cullaigh kept powering on to steadily increase his lead lap by lap and take a comfortable and well deserved victory.

In the U14's Joey Walker set a blistering pace that got him quickly off the front and a handsome lead by the end of the first lap. For the rest of the race he rode superbly, keeping his head down and legs spinning to finish almost a lap ahead of the field. Reece Wood led the chase group for the majority of the race and showed great maturity in sticking to his plan. In the last 5 laps he steadily pulled away to get a merited 2nd place. Alex Littlewood (RVS) finished third with a very powerful last lap.

Jess O'Brien (Aire Valley RT) found herself on her own after 3 laps in the U16 girls. Nonetheless she rode a diligent and intelligent race to safely take the win from Naomi Johnston (Clifton CC) and Caitlin Tromans (East Bradford CC).

In the boys U12 the usual suspects of Tom Pidcock (Aire Valley RT), Tom Humphreys (Wakefield Tri), Brad Dransfield (North Midlands Youth Squad) were joined by Jamie Ridehalgh (Aire Valley RT) in setting the pace over 15 laps of the circuit. They quickly established a breakaway group that was tenaciously pursued by 1st year rider Jim Brown (Holme Valley Wheelers) for 11 laps before he got dropped - fantastic effort. Ridehalgh at first couldn't quite grasp the cat and mouse game going on between the other three leaders but soon got the message when he found himself off the front rather too often. As the bell sounded for the last lap Pidcock launched a lengthy attack and was hotly pursued by Dransfield. However the group were soon back together for a blistering sprint along the last 100 metres with Pidcock getting the win from Dransfield who just edged it in front of Ridehalgh.

Hannah Banks (East Bradford CC) rode a characteristically finely calibrated race in the U12 girls and soon established an impressive lead. However, Jessica Manning (Leeds & Bradford) kept her in her sights for most of the race but was unable to make sufficient ground on her to prevent her taking a comfortable win. Third place went to Felicity Gledhill (Planet X) who rode co-operatively with Tilly Brown (Holme Valley Wheelers) until the last lap then launched an impressive attack to ensure her place in the medals.

Jenson Young (Pedalsport) rode an aggressive race in the U10's to take a well deserved win. He was off the front of the main peloton almost from the start and kept the pressure on all the way. His nearest rival was Sam Watson, who at times looked like he could get across the gap, but in the end had to sprint it out with James Ince of KCA for second place. Ince himself had a great ride and got a very well deserved third.

Ava Oxley kept the form she has shown all season with a fine performance and got the win in the girl's.