Emma Pooley can't believe it as she crosses the line to become the new British Road Race Champion.,

In an incident-packed women's British road race championship, Emma Pooley held her nerve amongst the crashes, race restarts and reductions in race distance to take the national champions' jersey. On a course which seemed built for the diminutive climbing-specialist, Pooley and her Cervelo team were attacking from the off and made the racing, rather than followed wheels. 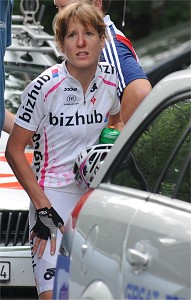 Breaking Nicole Cooke's nine year deadlock on the championship, Pooley used the element of surprise to attack her rivals in the closing kilometre and hold on to win the biggest championship of her life.

Right: A bloodied and in pain Catherine Williamson, an international rider for GB, is helped back to the holding area of the race after the big crash on the first lap.

From the off, Olympic Silver medallist in the Time Trial,  Pooley was attacking the initial mile-long climb on the 7.5 mile Pendle circuit, but no sooner had a gap been established by a small group, came news of a horrific crash in the bunch on a 50mph descent.

Riders who had been dropped and were chasing to get back on, struck team cars that had stopped behind the crash and the race was stopped for over an hour as two ambulances took the worst affected to hospital.

When the race was restarted, shortened to four rather than the planned eight laps; Pooley's tactics remained the same as she attacked on the mile long climb from the very bottom coming out of Barley.

But no sooner after Pooley's attack was nullified, Olympic RR Champion Nicole Cooke would attack. It was something that went on for the whole race with neither able to escape the other. On several occasions, Cooke joined Pooley, however a tactical battle then ensued; Pooley refusing to work with Cooke and allowing teammates Lizzie Armitstead and Sharon Laws - who themselves had a lead over the bunch - to make the catch, before the cycle of attacking was repeated.

After Laws had attacked on the final hill a few K out, and failed to get away, it was the turn of Pooley who saw an opportunity open up for her and while she gave her effort full gas, behind, Armitstead and Laws could sit on Cooke who had to chase down Pooley. Nobody was able to close the gap and in the sprint, Armitstead beat the 10 time champion to take the Silver medal with Cooke third and laws fourth. What a race!

Emma Pooley: “It was a very tough race, and a weird one as well. After the race had been stopped for over an hour after that awful crash, and I feel really bad about the girls who crashed, but the race that followed was really strange. It was only four laps, half the distance we were expecting and  although it is a tough circuit, it was only half as tough. I had to race right from the gun and make it hard straight away.”

“Nicole is so strong at the moment. I was trying to get away from her because I know I can’t beat her in the finish. On every climb I couldn’t get rid of her and then she was counter attacking. I only really won it because I had the element of surprise because no expected me to attack near the finish on the flat.”

Pooley was simply stunning at times, seen here attacking and descending at speed and only Nicole Cooke is able to react but still having to fight to bring Pooley back.

“What happened, was that they were all looking at each other and I was on the front because I didn’t want the group behind to come back because then I’d be seventh instead  fourth. So I  was on the front and they were looking at each other for the sprint because it was only a K to go and I looked over my shoulder and had a gap and it’s normally very hard to get a gap so I’m not going to leave this one. So I rode and then I think Nicole thought she had to chase because while we don’t ride a team, I didn’t think Lizzie or Sharon were going to chase me.”

“This win was so unexpected and I had resigned myself to coming fourth by the last lap and it is such a big thing to win the National Championship and you can feel really proud each time you put the jersey on. I’m really looking forward to racing now it on.”

Relive the race picture-by-picture in this mega slideshow

Catherine Williamson: One of the victims of the crash on the first lap was Catherine Williamson who destroyed her bike in the crash but did  manage to find another to take part in the race when it was restarted. Talking about the crash, she explained “it was a really really fast descent and I was near the front and round one of the bends, some one rode into the back of my wheel, and that sent me into the bushes. Girls were crashing into the middle of the road and then the cars had to stop behind that and with it being on a bend, more riders who were chasing to get back on, came down when they hit the cars. There was a girl I think with a broken hip and another girl hurt her back.”

Nicole Cooke: Third in the senior championship after 10 titles – “It was hard. The course was very hard and as Lizzie said on the podium and Emma said many times in the race, they were riding as a team and the strength in numbers came through. I was racing to win and trying to make it a hard race with the shorter distance. Lizzie was in trouble on the climbs and if the elastic had snapped, it may have made it more of a head-to-head,  a one-on-one, and more of an even matchup.”

After a regrouping with a lap to go, Nicole Cooke sets about breaking the race up again with an attack at the bottom of the climb.

Lizzie Armitstead: “I enjoyed the descents, they were perfect for me to come back after being dropped. On the top of those climbs when you have riders like Nicole Cooke and Emma Pooley counter attacking each other, I can last two attacks and then I’m gone. In a bigger race, there are more wheels to hang on to but today I was in no-mans land a lot of the time. It was very tough.”

“I was gutted last year with my Silver but the course was better for me and I should have taken the sprint because I think on my day, I am faster than Nicole. So I didn’t do myself justice last year. This year, Emma made that surprise move which was her only option at that point and nobody reacted quick enough and so to finish second, I was very happy.”

The Under 23 Podium: Katie Colclough, Lizzie Armitstead and Emma Trott.

The race gets underway in the sunhine of Pendle at the start/finish in Barley.

Emma Trott leads the field through Barley at the first start of the race.

Rider from Sandy Wallace Cycles is the first attacker with EMma Pooley looking omnious in the background.

Emma Pooley attacks on lap 1 and looks back at Nicole Cooke to see the reaction to her big effort.

This was the state of the race before the event was stopped between Roughlee and Barley. A small break led here by Lizzie Armitstead and Katie Colclough. 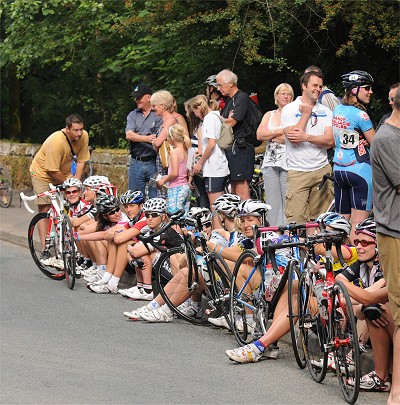 The riders had a long wait for the restart.

Sarah Storey leading the fightback behind the leading foursome. With Sarah are Katie Colcough and Emma Trott.

Natalie Creswick chasing Storey, Colclough and Trott a few seconds in front of her. Also in this chase group of two is Kara Chesworth.

On the climb near the feedzone with only a few K to go, Sharon Laws launches an attack but fails to get clear. It was shortly after this that Pooley made her winning move.

A delighted Cervelo trio after the race. Armitstead, Pooley and Laws.

Pooley sprinting for all she is worth before raising her arms to face in amazement at her victory.