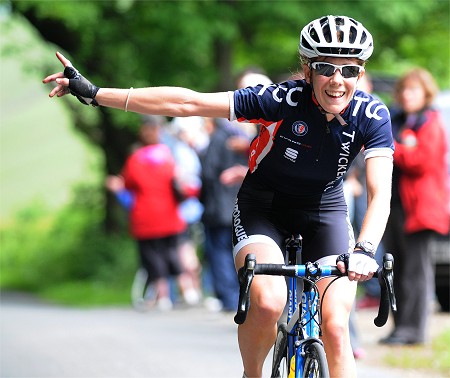 Natalie Creswick (above) of the Twickenham CC won the Capenwray Road Race in style on Sunday by attacking on the final lap and winning  the race alone,  over a minute clear  of Welsh rider Kara Chesworth (Dysynni CC) who was second. Laura Trott won the  Junior RR Championship.

The Lune RCC event was three races in one and rolled out from the Aughton Village Hall (Lancashire) to the circuit a few miles away shortly after 10am. With a strong wind blowing and the rain falling every now and then, conditions were not perfect but certainly good enough to help the riders who wanted to make the most of them. The circuit too was one where the strong riders were going to have plenty to play with when they wanted to stamp their authority on the event. 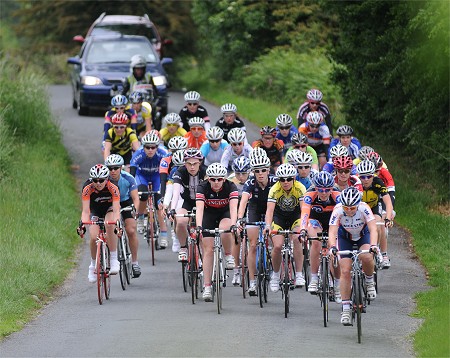 Lap 1 and the race is all together.

With Trott being the only junior in the lead group, the title was hers for the taking should she be able to stay with the senior riders. That was no problem for the young champion who has already represented Great Britain many times this year and won an international stage race in Europe.

The only problem for Laura came with two laps out, when, because of fatigue, she lost concentration for a moment and fell along with at least one other rider. The Welwyn rider was equal to the task though and managed to drag herself back up to the bunch before the top of the circuit’s big climb. 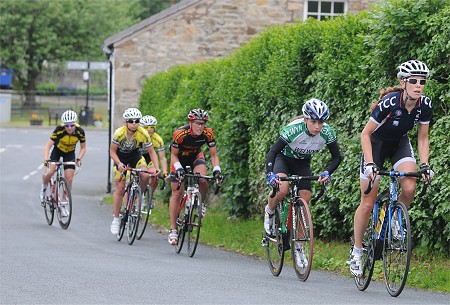 It was clear from how she was racing from the front on the climbs that Natalie Creswick was in fine form.

Behind the lead group, the bunch split into two early on and that was pretty much how they  stayed. Back at the front, they too stayed together for the majority of the race with only a few of the riders losing contact. Stirling’s Jane Barr did so with two laps to go and local favourite Leanne Thompson also had to give best with breathing problems.

It was the final lap where all the action took place to decide the winner when the pressure from Creswick's attack saw the break explode into pieces and while the Twickenham rider soloed on to win the race alone, the chase group of three managed to stay clear of the rest of the break to contest the minor placings with Chesworth winning the uphill sprint for 2nd ahead of Anna Fischer.

Natalie Creswick (Twickenam CC): “I’m really pleased with that victory. With a lap to go I thought I’d try and get a gap on the rest and I was never quite sure how much of a gap I had on them. I kept looking over my shoulder but was telling myself to keep my head down and keep going to the end.”

“The break today was a strong group of riders and we were all working well together. The break went away the first time up the big climb when Anna Fischer (Maxgear) was on the front turning the screws and I knew I had to stick with her so I didn’t get stuck in the bunch behind.”

“Everyone was working well today, Corrine (Hall) was on the front up the climbs, Ali (Holland), Anna (Fischer) too and we all had the same aim today and that was to keep the break away. It was a good course and there was no let up. Even the downhill bits were twisty and you were having to focus hard on getting around them safely.”

Laura Trott (Welwyn): The junior road champion who won the title as well in 2009, was very happy afterwards. “It was good out there and I’ve had a good year too, I seem to be flying and lets hope I can hold that for a while yet.”

“It was quite hard to get back on after my crash and I started to park up going up the hill as I’d had to try so hard to get on. I knew though that as long as I could stay with the group that I’d win the championship. I was actually glad the race was on this course because if it had been on a flat course, although I am a good sprinter, I don’t know whether I would have outsprinted the others.”

“I knew the first lap was going to be hard and that as long as I stuck with it, I’d be alright. My career  is coming together for me this year and all I need to do is get selected for the Track Worlds (Juniors) and hopefully get the results I want there.” 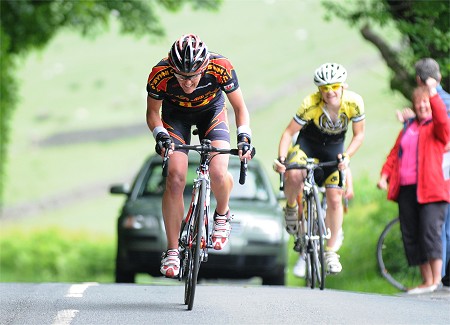 Kara Chesworth (Dysynni CC): The rider from Wales who is hoping to represent her country in the next Commonwealth Games, was pleased with her second place after almost not coming to the race. “This is a very hard race. I’ve done it the last two years and I got dropped on that hill each year and have to chase for a whole lap to get back on. I was dreading the race to be honest!”

“I am climbing better now and my form is coming on really well as I’m aiming to peak for the road race championships in two weeks time. The first hill can always be a bit mad and I found myself right at the back and I had to sprint to make the split but it was fine. The races this year seem to be very very different, the standard seems higher and the girls are keen to race which is exciting.”

Having seen the road race championship course in  Pendle, Kara explained that she didn’t know what was more scary, the climbs or the descents! “I’m very much looking forward to competing with Nicole (Cooke) and hoping to do well as I’m on the selection list for the Commonwealth Games.”

Anna Fischer (MaxGear RT): The rider from Germany finished third in this tough race in Lancashire and was one of two riders from her team who made the early selection which she herself helped create. Talking about the final lap when Natalie Creswick made her bid for freedom, Anna explained “we had a go at staying with her in the beginning but once she got away, no-one in the break was working anymore. She got out of sight so quickly and we couldn’t agree on who as going to do the work so we slowed down.”

“It was a hard race and we were all in the break working hard all day so it was hard to have the legs at the end to go with the attack.” Anna, who has been in the UK for five years, said it worked well for her to break the race up early. “I was at the front at the start as we had a plan to split it up because both Ali and I wanted to get in a break. Natalie though was going so well at the end. Ali and I both love the hilly races and were waiting for this race and wanted to do well.”

Both Ali and Anna certainly travelled a long way to take part, Anna from Bristol and Ali from Plymouth.

Hannah Barnes (Motorpoint Marshals Pasta): One of the favourites for the Junior title was Hannah Barnes who is pretty rapid in a sprint but admitted afterwards the circuit wasn’t one that really suited her. “I’m not so good on the hills and the one here was a real killer. The women today had the pace on and I couldn’t go with it. The second lap, I was hanging on about 30 seconds down but then just died and ended up in the peloton for the rest of the race.”

“I’m still happy with second as Laura is a top rider. At the end I just did my best to follow the wheels on the climb and was watching the other Juniors and when Sarah came past, I got on her wheel and sprinted. I didn’t want to go too early as it gets steep towards the end.”

Hannah is now really looking forward to the Tour Series Women’s circuit race on Thursday in Stoke (3pm) where she will be riding with two of the other ‘Barnes family’ in the colours of local sponsor, Motorpoint Marshals Pasta. “I like road racing but I do miss the crits” she said. 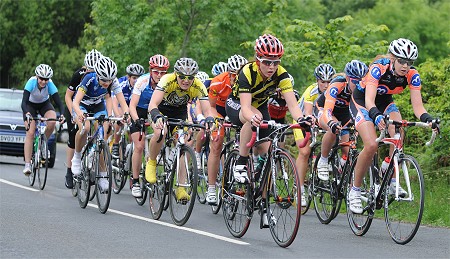 The peloton on the lower slopes of the main climb with two laps to go.

Joshua Tarling sprints to victory at the Junior CiCLE Classic

Despite his initial breakaway being caught by a two-man chasing group, FlandersColor Galloo’s Joshua Tarling powered ahead once more for a sprint victory at the 7th edition of the Junior CiCLE Classic.

A host of Britain’s biggest road cyclists – including Geraint Thomas, Lizzie Deignan and Chris Froome – have today called on the Government to urgently act to protect the future of talented young people in the sport.