Sunday, May 23rd| by Richard Robotham 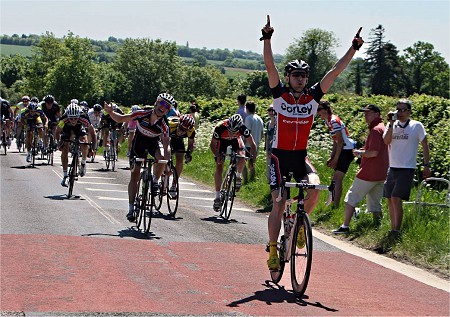 With the temperature in the mid twenties and no wind, there was little chance for anyone to make a race winning break stick such was the strength in-depth within the 77 strong field of riders. That didn’t deter those willing to give it a go however but no sooner was a break for freedom made, that the bunch swallowed them back up again.

The most notable of the breaks was up to 20 seconds by Ashley Cox (Team Corley Cycles) and Mike Jackson (CC Luton) which managed to stay away for almost one lap of the 10.4 mile gently undulating circuit.

With four laps on the board, the race seemed to settle down to a moderately high speed lapping at 25 mph. This pace put a stop to any further attacks and as a result forced a bunch finish which Simon Gaywood (Team Corley Cycles) took by  two clear bike lengths after launching his attack at the foot of the climb to the finish.

Was there a team plan for todays race?
SG - "The rest of the boys in the team told me to sit back a little and follow a wheel and not too make too much effort in case it came down to a gallop. I did the minimal amount of effort, but I marked some of the moves as I didn’t want to miss anything. Most of the work was taken on by team members, Roy Chamberlain, Ashley Cox, Jake Hales, Simon Henley and Mike Smith  who marked most of the moves and tried to get a split going.”

Were you worried about the early breaks in the first part of the race?
SG – “I made sure I was there or there abouts anyway in the early moves and in some of the few early moves but you could tell that the breaks were coming back any way, even after the odd surge.”

Did the weather and lack of wind play its part today?
SG – “I have ridden this course before and it needs a strong side wind, which makes the race completely different. The race can be savage in windy conditions but with a calm breeze it made it a flat day. It made it so much easier for riders to sit in and hide.”

After the first few laps there was no major action was that part of your game plan. Were your team trying to drive the pace?
SG – “Riders were  getting miffed and in the last few laps riders were trying to get away, but there was a bit of a lull and most riders accepted that the race had the potential to come together at the end, so they just sat back rather than trying to make a break.”

How did the last mile play out for you?
SG – “In the last  mile I was sitting on a nice easy  wheels, in front I had  Roy, Ashley with Jake Hales behind me. With the guys in front of me giving me a good lead out, all I had to do was sprint the last hundred metres. When we hit the bottom of the climb, a few riders started to kick off the sprint but I had a nice wheel to come off so all I had to do was go as hard as I could. When the gallop started, riders started to come up on my shoulder and I thought they would keep going but I kicked and  they didn’t progress any further so I managed to pull away from them rather than them put any pressure on me.”