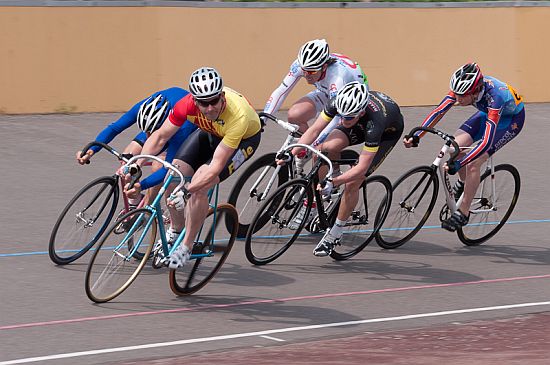 Hundreds of friends, family, club mates and former British Cycling colleagues gathered in Dorset on Friday 10th June to attend the funeral of Robert Jefferies, who was killed in a collision with a car near Wareham on 26th May. Mourners travelled from across the country to celebrate the life of a man known to many as simply ‘Big Rob' in a moving service held at Poole Crematorium.

The hearse containing Rob's coffin, draped in the jerseys of his numerous clubs, was escorted by a group of riders from Rob's final club, Poole Wheelers, and riders from neighbouring club, Bournemouth Jubilee CC. The outriders were resplendent in their full club colours, in recognition of the family's wishes that the service be a vivid and colourful celebration of an equally vivid and colourful man.

The crematorium's chapel was packed with guests young and old, some sitting, some standing; his club mates crouched on the floor before the pews. The service began with the hymn ‘Jerusalem' followed with a series of moving eulogies, first from Rob's 12 year-old daughter Eve, followed by a poignant portrait of Rob from his elder brother Will, and a final eulogy from Rob's father Richard.

After a final hymn,‘One More Step Along the Road', the funeral party moved on to the village hall at Harman's Cross, close to Rob's home of Swanage. Long-time friends Richard Hallett and John McClelland, together with Rob's older brother, shared their fondest memories of Rob, known by all who met him as a gentle giant, a true individual and a man with an unparalleled generosity of spirit. Rob's brother-in-law Chris finished with a touching verse summing up Rob's full life and untimely death.

Rob was a huge figure in the sport of cycling, competing since his teens at a high level in track racing and time trialling. He was a massive advocate of the sport, an authority on all things two-wheeled and worked tirelessly for the sport, both voluntarily and, from 2005 to 2011, for British Cycling. Rob was 43 years old and leaves a wife, Jane, daughter, Eve and stepson George.

A fund has been set up in Rob's memory to encourage young riders. Donations can be made to: