Things were looking up while heading over to Denbigh for the start of the Brenig Road Race in North Wales as the sky had changed from a dark black to a bearable grey colour. The weather report had said it was going to be torrential rain, sleet, snow and heavy winds with the added negative figure temperatures making it a day to remember. The weather soon changed at the race HQ. The sleet and rain started lashing down and some riders didn’t even bother signing on. They got back in their car and headed back home. They were the sensible ones.

About 53 riders in total signed on and prepared themselves for the day ahead and for just a moment, the weather eased off again and it looked as if we might have the weather gods smiling down on us. We finally got things going. The race rolled out in neutralized mode through Denbigh and once out of the town, the flag dropped and the race was under way.

Straight away there were attacks. The climb up the ‘Sportsman’s’ was brisk thanks to a roaring tailwind. Riders were being spat out the back and hanging on for grim death. As the climb levelled out, the pace picked up again. A few riders managed to get back on but only to be shelled once again up the steep final part of the Sportsman’s. The cold conditions did not seem so bad at first but once we turned left onto the B5105 heading and towards Ruthin, we started to really feel the strong side winds and low temps.

The rain and sleet by this time were really bad and it was almost impossible to see the riders wheel in front. A few attacks came on the decent into Ruthin and the pace really was high. With the high pace coupled with the freezing conditions, it became too much for some riders who were too cold and nervous on the descent. By the time we hit the Ruthin Road, most of them backed right off and missed the crucial moment in the race when about 20 riders pushed on.

The road towards the Llandyrnog Denbigh circuit was very exposed and a block headwind was raging down our throats. Two Champion System riders were trying their hardest to force the pace on but the conditions just were not letting up and the rain and sleet had become heavier.

As we turned onto the Llandyrnog Denbigh circuit for three laps, it was clear we were the only ones left on the road with about 30 miles to go. It was now two Rhos on Sea riders who were forcing the pace and attacking. Everything was being controlled by Champion System riders who were doing more than the lion’s share of the work.

The riding seemed to be the easy part. Getting energy gels out of pockets and grabbing water bottles seemed to become impossible. Eventual Race winner Ben Ives (We Love Mountains) attacked on a small rise towards the end of the second lap of the circuit, around 11 miles from the finish. Once he had established an initial gap on the chasing bunch, he used his TT ability to continue to stretch his advantage and get out of sight. 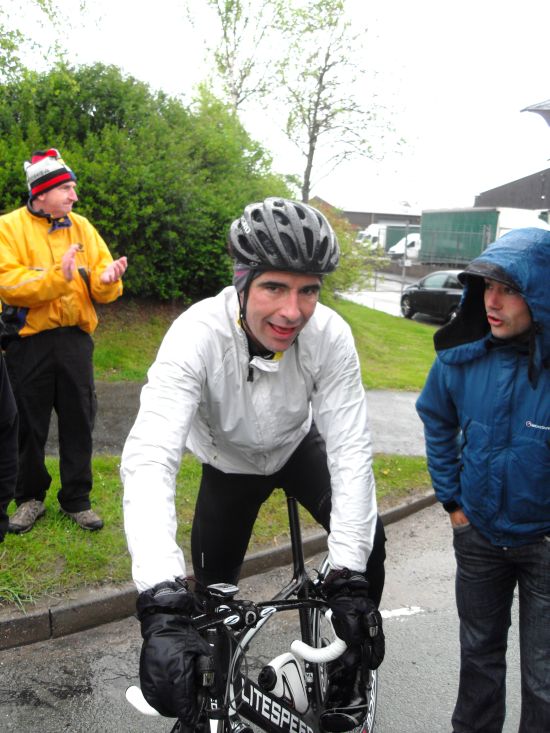 He said “It was real tough. With around 5 miles to go, I started to cramp on all the climbs and wasn’t sure if I would stay away. A mile down the road however, the race commissaire gave me some welcome news. I had 57 seconds on the bunch which stretched out to 1 minute 20seconds by the time I hit the three miles to go marker. From that point on, I was confident I could take the win. I was delighted when I eventually crossed the line in first place. It was my first win of the season and I hope it won’t be my last”

Back to the race and the chasers, the bell lap came and everyone in the chase group were still together and riders were taking turns up front in the hope to get the lone rider reeled back in and more importantly to get back and get a hot cup of tea and out of the cold. As if things could not get any worse, half way round the last lap, a section of the road had become so flooded that there was a NEG motorbike stopped right in the middle alerting us of the danger. I would say the puddle was at least half a wheel deep.

Pictured: Matt Ryan who is from Rhos-On-Sea CC. His aggressive riding earned him 2nd place on the day.

On the final climb, the pace really was high and the remaining riders stuck together trying to get as much shelter as possible from the driving wind. As the race approached the finish, the pace dropped again and as soon as the finish line was in sight the sprint came and Matthew Ryan (Rhos on Sea) took the bunch gallop. That was it. An end to a seriously hard day on the bike, which hopefully will never be repeated! Race organisers said at the finish that in all the years that the race has been going, never before has the weather been so bad.

Finally, I just want to say a huge thank you to all the race organisers, marshals, national escort group (NEG) and volunteers. Despite the horrible conditions they put on a superb event, from the route to controlling the traffic it was fantastic. It’s a must do event for every road racer.