This man knows what he talks about when it comes to cycling. If he can offer advice, he will offer it. If he thinks his opinion is valuable, he’ll offer opinion but Chris Boardman makes no bones of the fact that he’s a know it all.

When the subject is road and track cycling though, there’s not too much he doesn’t know. Now a pundit and commentator during major events like the Tour de France and the Road World Championships, Chris is also responsible for a whole range of ‘Boardman’ bikes, helping to get people in Britain on their Bikes. 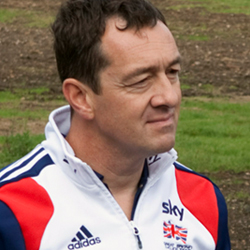 In the first part of a double feature with Chris Boardman for Member News, we caught up with the former Olympic Champion 48 hours after Mark Cavendish was crowned the first male British Road Race Champion in 46 years to look back on an epic day in Copenhagen for British Road Racing.

Member News: Looking back to the Road Race, how do you put that into words?

Chris Boardman: I think it was one of the biggest sporting moments that I’ve ever been present for. For a group of guys to all give their word three years ago to come together on one given day and put themselves in service of one individual that represented the best chance of winning for the nation, and then execute that plan is phenomenal. It was widely publicised, it was well known, there was no Plan B, they came together and you could see throughout the whole day, the selfless act of those guys who had no reason to be there, they weren’t getting any financial reward from it or any forcible kudos to be gained from doing it, it was just that they’d given their word to one of their mates, it really was an amazing thing to see.

MN: What was going through your head in those last few moments though? 400m out, you couldn’t see him and then he was there. Typical Cav…

CB: I mean, a sprint is chaotic, that’s the marvellous thing about it, it’s a chaotic environment and yet one individual will consistently, whether he’s got a lead out or not, crosses the line first and it’s an instinctive thing. It’s like a boxer, you have to see it in slow motion to see what just happened and that he and the team did that.

MN: What can you say about the man? He has everything doesn’t he?

CB: He’s a fascinating individual, he seems to work almost at an instinctive, emotional level, and he reads and feels a race well, you or I would see a mass of people around us, he seems massive gaps, it’s a subtle but fundamental shift.

MN: The best ever?

CB: Just his outlook on life, he’s a slightly different thinker to the people around him, he’s creative. I think it’s fair to say that right now, he is the most successful cyclist Britain has ever had, on pretty much any sort of scale you want to measure it on.

MN: Was there any bit of teamwork that stood out?

CB: I saw Geraint Thomas on Sunday night and I think he was a bit frustrated that he hadn’t had chance to do his bit, but sometimes you should be as proud of the things you didn’t do as you are of the things that you did, he did what he needed to do which was at the front and ready to do the job, he was aware of his charge and that was the only thing on his mind, he dropped back but then he noticed that this guy was where he needed to be on the right wheel and he didn’t try to interfere, or put his own needs to contribute ahead of the goal, he got out of the way and I think that’s one of the unsung stories of the whole thing really.

MN: Stannard, Froome, Cummings and Hunt, they all played their part too but Wiggin’s effort was phenomenal wasn’t it?

CB: Bradley did 8 minutes on the front; he controlled the whole peloton for 8 minutes single handily. From a physiological perspective that was pretty damned impressive on a course that’s very easy to get swamped, you can’t necessarily see the false flats on the cameras either, you wouldn’t call them climbs, but things that would stall an individual, at those moments it’s really easy to get swamped.

MN: Dave Millar was the captain I believe, but everybody played their part didn’t they?

Yeah, that’s the role he was given, they had a very concise plan, as I said earlier, and everyone had their role in that plan and it was utterly clear. In any good team, everybody is very clear on what’s expected, what their responsibilities are, they contribute elsewhere, but they know what they have to achieve to be successful, and they’re utterly focused with that role. That team did exactly that, and one of Dave Millar’s roles was to orchestrate the team. A lot of other teams in comparison didn’t have a clear plan and they hadn’t prepared for the lack of radios and they spent a lot of time going backwards to talk to the car and then going back again so they couldn’t react as quickly as they hadn’t set up to do that.

MN – I was going to ask you about that, a lot of teams, and pro teams wouldn’t be used to that I imagine?

CB – It’s not as if you didn’t know it was coming, the GB team could also be credited with doing that homework and the person that managed that whole project, Rod Ellingworth, has been mentioned several times by Mark (Cavendish) and everyone else.  I think somebody said, a bit flowery but true, that Rod was the person that dreamed that this was possible and then made an effort over the last three years to get those guys together in the winter, just to talk about this, just to be together, so it was all part of one person thinking on your behalf. They’re all off doing their day jobs and he’s constantly thinking about it and bringing it up, that’s attention to detail and that’s marginal gains if ever there was one.

MN: Looking back probably ten years or so, would anyone ever have expected GB to be as successful as they have been?

CB – No, and I think a lot of it is down to Dave (Brailsford), and it’s well deserved praise. He has his faults does Dave, but he’s not afraid to dream, and that’s the person that you need to be the head of the ship really, somebody that believes and will make decisions based on that belief that it can happen, and winning all these major races, he’s gone about organising and empowering people to prepare as if that’s going to happen, there’s no hedging his bets, and he’s prepared to do that.

In next week’s feature with Chris we look ahead to London 2012, Bradley Wiggins’ attempt at Road and Track and why cycling is cool…