Dare 2b MAD and Bag 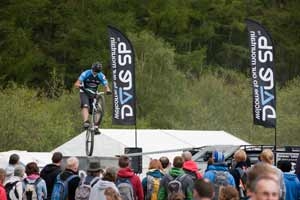 The MAD trials display team will entertain the crowds outside the gondola station on a regular basis, whilst anyone can have a go at getting airborne on the Dare 2b Air Bag.

The Air Bag will pop up in front of the Giant Screen and budding aerialists can perfect their dirt jumping skills or just see what it’s like to land in an oversized marshmallow, in front of the crowds waiting for the on course action to start.

Bicycle rickshaw company Ecocab Argyll are going to be based in and around Fort William for the World Cup weekend, offering green transport to and from the pub/restaurant/concerts/accommodation.

Look out for them and make it a fully pedal powered weekend. 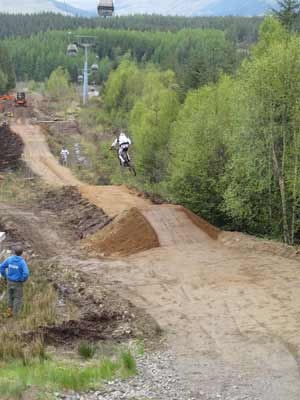 The Scottish Downhill Team stayed on after the Halo BDS race in Fort William for a few days of intensive training and performance analysis courtesy of Napier University.

Using head cams and GPS loggers, the team, including World Cup riders Ruaridh Cunningham, Fraser McGlone and Greg Williamson, were able to analyse every section of the course in terms of their speed, acceleration and impact.

They also tested out two of the 16m jumps on the new M82 section. The whole section from the Hip jump to the Wall jump will become a major spectator attraction, easily accessible from the finish with viewing to both sides and directly underneath the gondola. These will be the biggest jumps on the Fort William course and they’ll help keep it at the forefront of World Cup action.

The Fort William course can be pretty hard on bikes (and bodies), especially tyres. In order to maximise training opportunities for all competitors, Madison (the UK distributor of leading bike brands) and Continental tyres will once again be providing three service stations on the downhill course. This will allow World Cup competitors with flats or mechanicals to get back on track without the long walk to the finish with a non-functioning bike, or the painful wheel-destroying roll to the bottom. 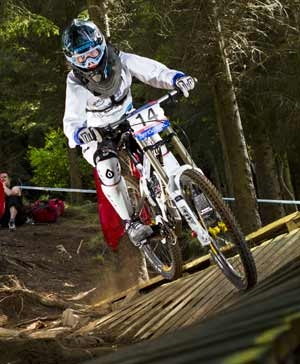 The Fort William round of the Halo British Downhill Series was compressed into a one-day event as the forecast for the Sunday was particularly doom laden. So the seeding runs in Saturday’s sunshine became the final results.

Thanks to everyone who applied to join the 2012 Crew. A few positions have now become available for the Saturday and Sunday, so if your free and would like to be part of The Crew, get in touch with Jennie on 0131 555 3820, or email jennie@raremanagement.co.uk

Away from the World Cup Village, fans will be able to rock out at the Downhill Downtown music festival which takes place at the Nevis Range Centre on Friday and Saturday night (8-9 June). Great Scottish bands such as King Creosote, The Phantom Band, Admiral Fallow, Bombskare, Stanley Odd and Bwani Junction have already been confirmed, providing the perfect soundtrack to an adrenaline soaked weekend.

Tickets are great value at £6 Friday, £15 Saturday and £17.50 for both days and are available here. For update subscribers, there’s a special discount on tickets by quoting these promo codes: 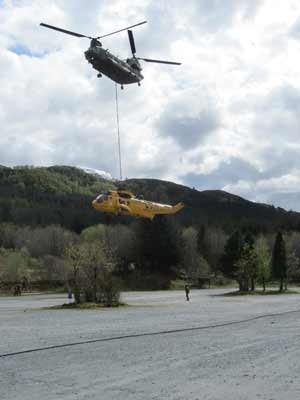 Something you don’t see every day...

The Nevis Range car park has seen some interesting things in its time including the annual transformation into the World Cup Village.

But just before the BDS race it received a pretty unusual visitation - a rescue Sea King Helicopter being dropped off by an Army Chinook. The Sea King had been on a mountain rescue mission when a major downdraft forced an emergency landing on the ridge between Aonach Mor and Ben Nevis.

The only way to extract the 7 ton Sea King was a lift from a mighty Chinook.

For more information and tickets go to http://fortwilliamworldcup.co.uk