SENIOR
Oli Beckingsale recorded a season-best ninth place, moving from 30th on the grid, however a better starting position would have surely unlocked a top-five finish for Beckingsale and his best result since the 2008 World Championships.

But a string of bad luck in the World Cup - including a puncture and broken front mech in Dalby, a derailed chain in Offenburg and start-line crash in Windham - meant Beckingsale was left with a lot of riders to pass in the opening stages.

At the head of the race a lead group of three riders - Julien Absalon, Jaroslav Kulhavy and Florian Vogel - formed, with a chase group of three more, one minute adrift. By lap three Beckingsale found himself in the third group and racing for 7th-11th position while setting the same laptimes as riders in 4th-6th but unable to bridge the minute gap which had formed in the first laps.

On the final circuit Kulhavy rode to the win ahead of Absalon and Vogel, while Beckingsale slipped to ninth, outsprinted on the line by Marco Aurielo Fontana and Moritz Milatz.

UNDER-23
Annie Last has scored Britain's second medal of the European Mountain Bike Cross Country Championships, taking silver in the women's under-23 competition and - in an historic moment for British cross country racing - the first time more than one medal has been won at an international championship.

Headed only by France's Julie Bresset, Last finished the race 51 seconds down, but significantly three minutes clear of the rest of the field - the large time gap representative of Last and Bresset choosing to race up in the senior category at the UCI World Cup. 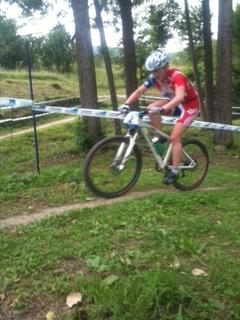 For Last the season so far has seen a string of personal bests - including 14th at the Dalby World Cup - and the European Silver will sit alongside the British Champion's silver medal won at the 2010 World Championships.

In an historic moment for British Cycling's mountain bike performance programme, Ferguson - a member of the Olympic Development Programme - secured the first medal for a British male cross country rider since Dave Fletcher rode to bronze in the 2007 World Championships.

Speaking after the race, Ferguson hailed the result, saying "it's what I've been waiting for all year. Today I felt like I was in the bike race."

Ferguson was headhunted by British Cycling's Olympic Mountain Bike Coach; Phil Dixon back in 2009 as a Youth rider and in an exceptional circumstance was accepted onto the Olympic Development Programme one year early.

Now in his third year on the Programme, Feguson has collected the Junior British Championship in 2010, extensive World Cup experience in 2010 and 2011 and now his first medal in international competition.

Dubbed "an exceptional talent" in 2009 by Dixon, Ferguson's progression through the 2011 season so far included fifth at the Dalby World Cup and sixth in Offenburg, before turning his attentions to the road for a mid-season block of training and racing which resulted with a 12th-place finish at the Junior European Road Championships - something Ferguson was certain influenced his latest result.

"The difference between here and the opening World Cups? Early in the season I didn't have the attacking legs. I was riding in the leading group of five riders in both races, but when the attacks went I couldn't go with them. But following the work I did on the road in the meantime, I kept adding speed to the legs, getting faster all the time. It helped me get the jump I needed for this race." 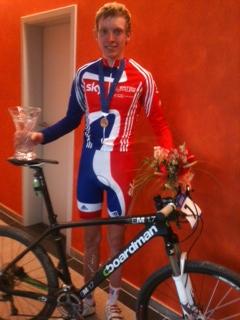 The European Mountain Bike Championships marked Ferguson's return to off-road competition and Dixon predicts further improvement before the World Championships as the second-year Junior rider adapts back to the rhythm of cross country racing.

"This is an exciting result and from here, Grant will only improve as we move to his next target race which is the World Championships. Compared to the course in Slovakia, the Worlds course in Champery will be much more of a technical test - the Europeans have shown Grant's physical ability and I think the Worlds is a chance to balance that."

Katy Winton and Beth Crumpton lined up in the Junior women's event and had mixed experiences. Winton had suffered from sickness the week of the event and despite being ill throughout the race finished 26th. Crumpton finished 22nd, but suggested a greater pace, setting the eleventh-fastest final lap of the race.