The biggest prize in domestic cycling, the British Championships affords the winner the right to wear a red, white and blue jersey worldwide for a year and in 2011 the cross country mountain bike competition takes place on July 17 in Richmond, Yorkshire.

The importance of the event is further increased, with selections for the 2011 UCI Mountain Bike World Championships revealed the week after the event - a standout performance here could be enough to secure a place on the team.

MEN'S CHAMPIONSHIP - Start List
Twenty years of heritage dominated in recent times by Liam Killeen and Oli Beckingsale Britain's Olympians will arrive in Yorkshire to go head to head again. It is expected that no other Brit will be able to match the duo who have taken top ten results in the World Championships and Commonweath Games Medals.

One surprise entry is Dave Fletcher; the under-23 rider receiving dispensation to ride in the men's championship event. On the right course, Fletcher could trouble the top two favourites, but is more expected to be in a race for the bronze medal.

Anticipated to be the most unpredictable positions, several riders are capable of a top five placing including Paul Oldham, Lee Williams, Nick Craig, Dave Collins and Adrian Lansley.

Typically the race of the year with the highest rate of attrition, the British Championships is also the chance for any rider finishing in the top eleven placings to gain enough UCI Points to qualify for the UCI Mountain Bike World Cup - for many the only opportunity to do so.

WOMEN'S CHAMPIONSHIP - Start List
A new era in British women's cross country racing and the British Championships was due and arrived in the form of Annie Last. The first new winner since 2004 and the favourite in 2011 - despite still officially being an under-23 rider - Last maintains this position thanks to top twenty results in the UCI Mountain Bike World Cup and a silver medal at the 2010 UCI Mountain Bike World Championships in the under-23 event.

Last's primary competition is expected to come from two wildcard entrants who have the potential to surprise the lineup of twenty hopefuls.

Nikki Harris - a cyclo cross specialist has returned from Belgium to the UK in recent weeks, convincingly winning rounds three and four of the British XC Series. Harris is a rider with international pedigree; a regular top-twenty finisher on the UCI Cyclo Cross World Cup circuit, a favourite for a medal and possibly the win.

Secondly is Sally Bigham - a mountain bike marathon specialist making a rare cross country appearance. Fresh from sixth at the UCI Marathon World Championships - where Bigham finished ahead of Gunn Rita Dahle Flesja and rode most of the race alongside names comfortable in the top ten of the UCI Mountain Bike Cross Country World Cup, Bigham has the numbers to justify her title of medal-contender, but has yet to focus on a cross country race, leaving her true potential in this discipline an unknown.

Over the weekend of 16-17 July hundreds of the UK's mountain bike Cross-Country competitors head to North Yorkshire to do battle in this year's National Championships. With 17 titles up for grabs, we can expect some outstanding racing as competitors from all four corners of the UK vie for the right to wear those all important national colours, proving they are the country's best.

This year, the venue is Aske Estate, near Richmond in North Yorkshire, home of the famous Krypton Factor assault course. Aske used to be a firm favourite back in the days of the NEMBA series and now the venue is firmly back on the mountain bike map thanks to the guys at Bikelicker Events, who are behind the Nutcracker Series. 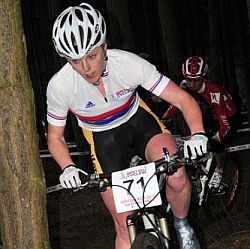 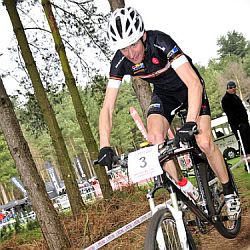 Annie Last and Oli Beckingsale, top contenders for honours on the day

What can competitors expect?

The Vale of York is the glacial flood plain for the melt waters of the glaciers that filled what are now the Yorkshire Dales and the North Yorkshire Moors National Parks so you can expect to be surrounded by some pretty spectacular scenery as the 6.5 km course makes full use of the natural terrain, to provide a challenging championship course.

Starting in a grassy field, riders out for their first practice lap may be lulled into a false sense of security, but they soon encounter the first feature, "Wood Yard", a punishing short, sharp incline that delivers them to "Jockey Cap" the highest point on the course, from where they will experience the first epic descent through "Mike's Wood" popping out at "Tumbledown House"

Here there's another short climb followed by another descent, before another climb up the "Grind". Another super steep descent follows through "Adey's Plantation" where the course emerges onto "Quad Field". A quick sprint across the bumpy field will take you to the first section of wooded singletrack, breaking out onto a short piece of fire road - a brief moment of respite - before you head back into another fast flowing, singletrack down to "Log Pile".

Another section of fire road follows, another moment to grab a breather, before it's back into the woods blasting through the "Troll Trail". This section of singletrack meanders through the woods throwing up drop offs and berms before emerging at "Lloyd Shorts" and the final section of fire road known as "Head Wind". This could be a final chance to overtake, wind permitting, before ‘Bluebell Woods" and the last singletrack blast before it's onto the home straight.

The organisers thinks you'll be looking at a lap of about 17-18 minutes if it's dry.

There's at least 122 metres of climbing per lap, over a mixture of grassland and fire road, mixed in with loamy, rooty, rocky, singletrack, mainly through wooded sections. When it comes to tyre choice, forget heavy-duty muds, as the course is pretty mud free. However be warned, forget your skinny tyres and perhaps opt for some mid range 1.9s at least, otherwise you'll find yourself slip, sliding all over the place on the loamy singletrack. If it's wet, it's the grassland that will be slippery.

The ones to watch:

With Olympic year just round the corner all the main contenders are upping their games. This means for the senior men at least, the race will more than likely be a straight duel between defending champion Liam Killeen and arch rival Oli Beckingsale who'll both be hoping to add another jersey to their already extensive collections.

On paper the course seems to be more suited to Killeen, with no major climbs for Beckingsale to play his ace card. The under 23 men's race sees Kenta Gallagher and Steve James finding their feet at senior level for the first year.

With Gallagher and James stepping up to senior ranks, this leaves second year junior Grant Fergusson primed to take that title. With a consistent and strong season at both national and international level boosting the young Scots confidence, he certainly will be the man to beat for the junior title, though Matt Sumpton, Ben Sumner and quite a few more juniors will be eager to prove a point!

Matt Dennis will be trying to make it a season to remember for all the right reasons as he takes on the masters, but will little seen Carl Sturgeon appear on the day to defend his title? Will retro bike lover Geoff Beetham dust down his knobblies and try and thwart Dennis adding the National title to his recently acquired Midlands Masters Champion title or can Phil Morris finally grab that elusive masters gold?

For the senior women, it looks as if the real battle will be for the runner up spots as defending champion Annie Last, who is currently knocking on the top 10 of the World Cup circuit ought to have too much all-round ability for her rivals. GB team mate Lily Matthews will not defend her under 23 title due to ongoing injury, leaving Jessie Roberts to trade her silver for gold, while there is a welcome return to the dirt for Horizon rider Ruby Miller.

Racing kicks off on Saturday 16th July for all those who fancy a go but don't want to race the Nationals. The Sweatmonsters Academy starts the proceedings for all riders under 16 invited to participate, for those under 12 entries is free. Then it's on to the Fun, Open and Sport races. Entries are available on the day for these events but why not save yourself a few quid and get your entries in now?

Championship day is Sunday with a full schedule kicking off at 9.15am with the Juvenile titles first to be decided, ending with senior races at 2.30pm.  As this is a Championship event there are NO entries on the day. Entries for the event close on the 19th June.

You can enter online at: www.xcnc.nutcrackermtb.co.uk If you prefer to post your entry in please send completed form to: Bikelicker Events Ltd, 48 Frenchgate, Richmond, North Yorkshire, DL10 7AG

There is camping available from Friday 15th through to Sunday 17th at a cost of £10 per pitch/camper/caravan. Pre booking is required and all entrants will be sent an essential booking form. Toilets, showers and water points will all be available, along with a bike washing facility. Please note as Aske Estate is private land, access to the site will not be available before 4pm on the Friday. Course practice kicks off Saturday morning.

MTB regulars, Quaver Catering will be on hand providing an excellent assortment of hot and cold food and beverages all weekend. For those you want to pre celebrate there will be a full evening of entertainment on the Saturday night with local brewery Black Sheep providing a licensed bar. You may be invited to take part in anything ranging from a slow bike race through to a full on Krypton Factor style assault course!

For more details about the National Championships please visit: www.xcnc.nutcrackermtb.co.uk