While the majority of Professional cyclists run to the sun during the cold winter months, not so a certain female cyclo cross rider who spends her long winter months living and racing in the Belgium town of Oudernaade. Not one to venture out in the cold too much myself I waited for Gabby to return home to the warmer climes of the U.K and arranged to hook up at her home in Lincoln for a chat and a coffee or two which she insisted she made with the coffee machine.

"I'm pretty much an outgoing type of person I suppose, I love to meet new people and I'll chat about anything really. I love music especially when I'm training; it's really important I think; dance music is great to train to. Something uplifting for when it starts to get hard. Ellie Goulding is pretty cool but I suppose I like anything really but it does depend what mood I'm in. When I'm out training I listen to stuff like Hed Kandi."

With the amount of travelling and commitments a pro cyclist has to endure what does Gabby do to chill and take some time out?

"I got into the Vampire movies, watched them all, read the books".

At this point Robert Pattinson was mentioned, went over my head, it's a girl thing apparently

"I am a bit of a romantic as well so when I do get the chance, I read, but that's usually on holiday, it's the only chance I get really."

Gabby is a qualified sports masseur:

"Yeah I really enjoy the sports massage stuff, its cool, it helps people and its beneficial and I get to meet loads of people. I don't dislike too many things but in sport you do meet people who are slightly irritating, I don't like bigheads, they really annoy me..."

So when did the love of cycling and racing begin?

"I come from a running background, my mum is a good runner (and cyclist), my grandad was a pretty good cyclist competing upto National level but I started doing the Yarborough crits just up the road, I was 15, my sister used to come back to tell me how much fun it was so I thought I'd have a go and I got to meet boys which was really cool and I just kept riding. But there did come a point where`I had to choose between running and cycling if I was going to do well and I was enjoying cycling more at the time." 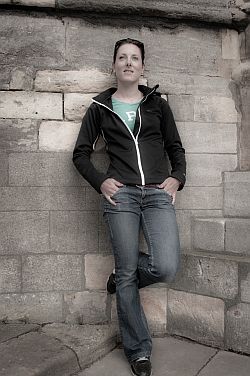 Gabby got to ride a couple of World cup events at cyclocross when she was 18.

"Yeah I think I must have been around 18, I rode those for Fat birds U.K which was Steph Wyman's team, that team sort of progressed into Global Racing and then Swift Racing and eventually I got to ride for Nicole Cooke's team (Vision 1) which was really good. It was a really good opportunity to ride with her and get to ride the really big races.I rode the 2010-11 season cross season for the Chainstay team and they are supporting me again for the 2011-12 cross season.They have a cyclists' house in Oudernaade which is great and their sponsorship really helps aswell, I get support at races and they sort my travelling as well.

I'm riding for Scott Contessa team for the summer,mainly concentrating on the mountain bike season,not doing much road stuff,probably some of the Tour series but mainly mountain biking, it's really chilled, a lot different to the cross, that gets really stressy and full on because thats the main thing for me."

Gabby rides Scott team issue bikes, so how does she rate them?

"They are really beautiful. The cross ones are probably the best around, I love them, purple and orange..."

And at that point I get dragged into the garage to see a rather fine display of Scott road, cross and mountain bikes and no pink ones?

"No but they are so beautiful, just look at them.. I think its so important to look good on the start line even if it's not a good day, let's have a bit of style please..."

How will the 2012 season develop for you?

"I have a steady start with the mountain bike because I have usually have 3 or 4 weeks off after the cross season so I'm just getting into my stride on the first two national series races, so they are always quite hard for me but I should be on the pace at Wasing in June. I got on the podium there last year and I like the circuit so I'm hoping to do the same again this time round. I've got the Welsh Championships coming up and I won it last year so I'm looking forward to that. Then I'm doing Mountain Mayhem for the Scott team."

During the first UCI cross race of the 2010/11 season Gabby crashed and was taken to hospital after knocking herself out.

"A bit of a downer in the first race,I had a big crash, knocked myself out and ended up in hospital, went down a steep descent with another rider and there was only one line you could take otherwise there was a big hole to hit and I went down the big hole, don't remember too much about it. I had to build myself back up from that both in fitness and confidence, so the season was really tough for me. I always felt tired, never seemed to get going but it wasn't too bad overall I suppose.the mountain bike season went pretty well though, it was my first year of serious racing, so i was pleased the way that went. 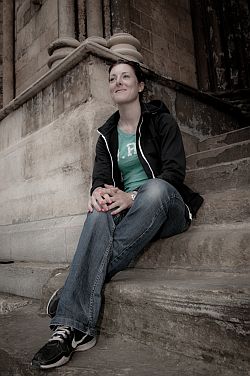 You were disappointed at the National Cross at Derby with third spot, I saw you coming over the line looking really down...

"I was actually pleased the way the race went, I went out strong from the start to stay with Helen (Wyman) for as long as I could to put some pressure on her to force a few mistakes which started to happen a little bit but on the long wet drag just after the start line she was able to pull away because she is a strong rider and there was a strong headwind as well. I prefer something a lot more technical.The European courses are getting quite technical and varied now which is really good.

"Well it's not a win but I knew I rode well, it was a bit of bad luck (with the crash on the last lap) but I was really pleased I pushed Helen until she pulled away."

www.gabbydaycyclesport.com, tell me a little about that...

"I set that up to help fund my racing. Obviously I'm always around cyclists and I know a bit about bikes so it seemed to make sense to give it a go but it is hard because there are so many large companies doing the same thing but as a plus, I do race and people know about me and who I am. My mom rides for us, she's doing really well with the time trials, she's up there at the top so I thought why not put her in my kit.

Do you have any heroes?

When I was younger in my running days it was, and still is I suppose, Kelly Holmes. I always looked up to her and try to achieve what she did and I became a big Lance Armstrong fan when I got into the cycling. Whatever people think of him, you still have to admire him for what he's achieved, fighting back from the cancer to acheive what he has.

"Oh definitely, the standard of racing has improved a lot and there are a lot more girls coming into the sport now which is really good. The good thing is now some of the larger professional teams have separate women's teams; HTC and Garmin/Cervelo are two that sping to mind. It would be nice if every men's pro team had to have a women's pro team - that would do loads for women's bike racing.

I've got red hair at the moment but I could be a bit blonde and I used to work in a florist shop!