The fifth article in a seven part series in partnership with Verve Cycling - the official power crank supplier to the Great Britain Cycling Team - explains how to set training zones based on your FTP.

If you haven’t tested, you should read the previous article in this series.

Calculating your training zones from your FTP

Once you have your FTP, the easiest way to calculate your training zones, especially if you’re following one of our Digital Training Plans, is to use our online Zone Calculator.

You’ll probably notice though that there are a variety of calculators available that produce training zones that appear to differ significantly. As with FTP testing protocols the key is consistency so, once you find a set of zones, stick with it. It makes sense though, if you’re following a specific training plan, such as our Digital Training Plans, to use the zones that it’s designed around.

On TrainingPeaks, other training platforms and on your head unit check to ensure that the training zones tally with the ones you’ve calculated and a working with. This will usually involve going into settings and inputting custom zones.

Below is an example of the training zones produced by the British Cycling online zone calculator. The rider averaged 250 Watts during their Functional Threshold Test, resulting in a FTP of 238 Watts and the zones have been calculated based on this figure. The bottom figure in the table is the rider’s power to weight ratio at threshold and is calculated by dividing their FTP score by their weight in kilograms. This figure is probably one of the single best indicators of cycling performance, especially on climbs, and is what you should see rising if you’re following a well designed structured training plan. Both gains in power and reductions in bodyweight will cause this number to rise but it’s always a balancing act and too drastic weight loss can significant drops in your power output. 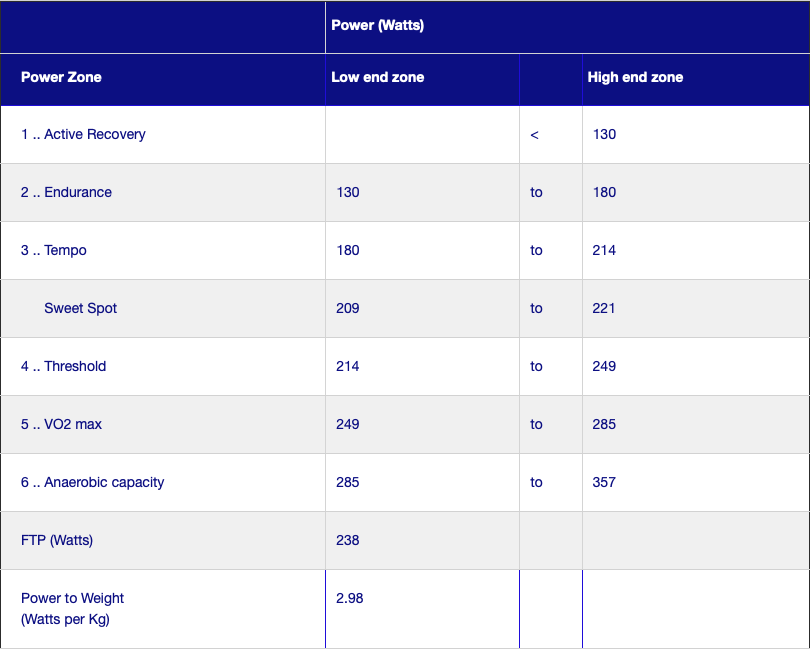 What it feels like: Very easy, just turning the legs over and there should be no sense of burning or fatigue.

Typical sessions: An Active Recovery session the day following a tough ride or race. Going out for an easy spin has been shown, along with other measures, to improve recovery and ease muscle soreness. This zone will also often be used for the recovery blocks during interval sessions and as part of a progressive warm-up or cool-down.

What it feels like: Steady ride all day pace that’s the bread and butter of successful sportives and forms the endurance base that supports higher end efforts for racers. It should feel comfortable, you’d still be able to maintain a full conversation, but it’s purposeful and, especially towards the upper end of this zone, you’d be having to start concentrating to maintain it.

Typical sessions: The majority of long weekend rides, especially early on during a training plan, and flat sections of sportives will be ridden in this zone. You’ll also build through this zone as part of a progressive warm-up and sometimes use it for recovery during interval sessions.

What it feels like: Tempo is also known as Intensive Endurance and, as such, is a determined and purposeful effort that you can, with concentration, maintain. There’s a definite sense of effort, conversation would be in shorter sentences and fatigue will gradually build up in your legs.

What it feels like: The Sweet Spot is found at the upper end of Zone 3 (Tempo) and lower end of Zone 4 (Threshold). As such, you’ll be having to concentrate to maintain it, conversation will be in short sentences and, once you’ve been riding at this intensity for 20-30 minutes plus, you will definitely start to feel some fatigue in your legs.

Training with power allows you to accurately sit in this relatively narrow zone. It’s known as the Sweet Spot because it strikes a desirable balance between an intensity that will stimulate physiological change but isn’t overly fatiguing or as physically and psychologically challenging as Threshold work.

Typical sessions: Sweet Spot workouts are often used as a bridge between steady state endurance training and more demanding threshold work. As such, many riders will perform 2X20 minute Sweet Spot efforts before building the intensity of this session up to threshold level. Sweet Spot efforts of 5-20 minutes duration are also excellent to add into a commute or a longer endurance ride to get the best return from your session.

What it feels like: If you’ve conducted the Functional Threshold test, you’ll know exactly what this zone feels like. It’s tough to maintain as you’re hovering near to your limit but is just sustainable. Conversation will be very clipped and, especially at the upper end of this zone, a burning sensation in your legs will definitely be noticeable. Theoretically this zone should be sustainable for 60 minutes and although experienced well trained riders might be able to manage this, novices won’t.

Typical sessions: As well as the Functional Threshold test, 2X20 mins in this zone is a classic workout. Many riders will use Threshold as their climbing pace during sportives and long training rides, knowing that it represents their riding “red-line”.

What it feels like: Pushing very hard, requiring high levels of effort and focus with little or no scope for communication. Breathing feels extremely hard and your legs will start burning very quickly at this intensity.

Typical sessions: VO2 Max efforts are typically between 3-8 minutes in duration. This could be the the 5X5 minute efforts of a 5 Minute Ramped Interval Session, attacking a short steep climb or bridging a gap to a group up the road.

What it feels like:  A near to 100% sprint involving maximal effort.

Typical sessions: A final dash for the line or contesting the sprint for a village sign typify this type of effort. Longer efforts in this zone, up to a minute, might require some pacing, especially if you’ve multiple ones to complete. Shorter sprints will be all-out.

In the next article in the series we look at how to pace some typical rides using power.

British Cycling Members can save 15% on an InfoCrank package with Verve Cycling.

Do you know the difference between 105 and Dura-Ace and which should you opt for on your next bike? We talk to Julian Thrasher, Head of Training at Shimano UK, to find out the answers.

Buying a cycling helmet with Lazer

If you’re racing or riding a British Cycling sportive, a helmet is compulsory, most clubs insist on them and the majority of riders when out training now opt to wear one. However buying one can be a confusing experience so we’ve asked Lazer, British Cycling’s official helmet supplier, for their advice.

Commuter, sportive rider or seasoned pro your bike is what makes you a cyclist

We guide you through the basics of bike anatomy, show you how to find your perfect position on the bike to maximise comfort and performance and how to maintain your bike to keep it running smoothly and efficiently.

Dress for summer cycling with Kalas

How to degrease and lube your chain