Tosh Teare of the Equiom IOM Junior Cycling Team got his season off to a dream start by taking the Hatherleigh Junior Men’s Road Race on a glorious March day in Devon.

In Round One of the 2019 British Cycling Junior Men’s Road Series a small group of approximately five riders took up the initiative, deciding it was time to get the season off to a strong start, breaking away as the race entered the first of five laps of the 11 mile loop in the middle of the circuit.

It wasn’t until Spokes Racing Team rider Adam Mitchell crashed during the second lap that the bunch got split up, with more than 20 riders either being involved or caught behind the pile-up.

The peloton split into two larger groups, over 30 seconds apart, and the race continued in the same vein for another hour with riders feeling their way.

As the race entered Hatherleigh and the final climb to the finish a group of eight riders broke away and pushed the race up the long drag finish and to the line.

Three riders apiece from Spokes Racing Team and Equiom IOM Junior Cycling Team played cat and mouse up the final ascent, attacking and counter-attacking as the line came into view.

But it was Isle of Man rider Teare that produced the big finish, crossing the line a bike’s length ahead of Aaron King of Spokes, with Iwan Evans of The Bulls team in third place.

CONDITIONS ON THE COURSE

The weather couldn’t have been any better for the riders at Hatherleigh, with blue skies and sunshine and only a mild breeze in the hills near Okehampton.

The 105.91km course allowed for a steady first 20 minutes as the riders headed out of Hatherleigh towards High Hampton and the rolling climbs and quick decents near Halwill Junction.

After his victory, Teare commented: “I had been feeling confident to win the race and knew that if it came down to a sprint I’d have enough to take it.”

Having competed in the race last year in the blistering July heat, Teare knew what to expect and spent the first hour of the race sat towards the back of the peloton conserving energy.

Teare put his good start to the season down to a good winter’s training and starting to work with a coach for the first time, adding: “It has given me more structure and direction to my training, it’s really helped.”

That’s followed up by the Cadence Junior Road Race in Powys, on Sunday 19 May. 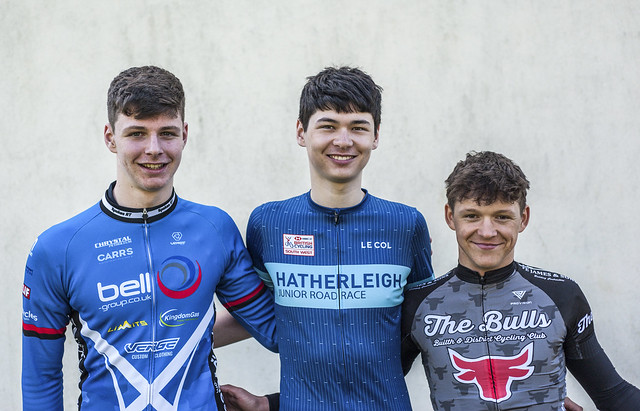 British Cycling is pleased to announce that sportives and other non-competitive events can resume from Saturday 5 September 2020, under new guidance approved by DCMS.