Madison Genesis' Tom Stewart sprinted to victory in the Grand Prix of Wales, round three of the Motorpoint Grand Prix Series.

The 26-year-old from Cusworth near Doncaster timed his sprint to perfection with team-mate Erick Rowsell second and overall Series leader Chris Lawless third.

In-form Stewart, who won the Velothon Wales earlier this season as well as the Lincoln Grand Prix, had been part of an earlier long break with 15 riders getting clear, but despite being caught as they hit the first of 10 laps of a finishing circuit, Stewart had enough left in the tank to take the win. 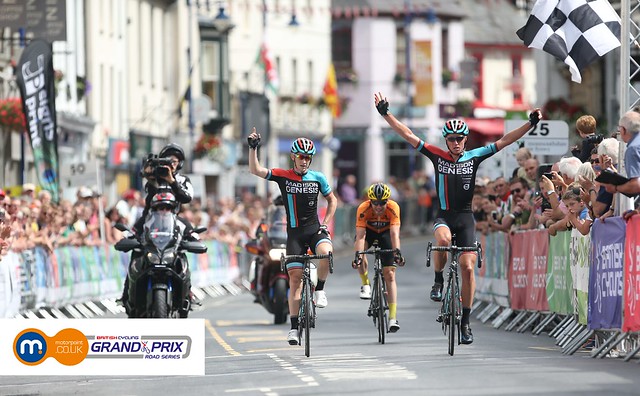 Not long after the neutralised section ended the first attacks came, and the rider who got clear first was Matthew Boys (Envelopemaster-Giant Sheffield), who raced ahead with great pace to gain around a minute and a half on the rest of the race by the time they reached the first circuit of the Grosmont.

Those four were then, in turn, chased by Jeremy Durrin (Neon Velo) and Team Rwanda’s Joseph Areruya, but as the race headed for the tough climbs of the Grosmont, Pedal Heaven upped the pace and brought it back together.

However, in an active race Daniel Patten (Team Wiggins) was next to have a go, chased by six others, but shortly after he had gone through Grosmont for the first time a crash in the bunch led to the race being neutralised.

After a break of around half an hour, the race resumed – but with one lap of the Grosmont circuit removed to keep the race schedule on track.

Back on the move, Patten was given his 40 second lead back, while behind him the six chasers were Jake Tanner (Envelopemaster-Giant Sheffield), Tom Stewart (Madison Genesis), Tom Moses (JLT Condor), Rob Partridge (NFTO), Dexter Gardias (Pedal Heaven) and Adria Moreno Sala (Raleigh GAC).

Gardias dropped back shortly after the race resumed when a bag blew into his gears and jammed, forcing him to dismount and try to free the blockage while the rest of the chasers continued after Patten.

As they completed the second lap of the Grosmont climb Patten’s lead had dropped, and he was caught by the five chasers shortly after as the bunch hung about two minutes back.

"Everyone looked in a right state, I knew they had had a hard day!" - winner Tom Stewart.

But it didn’t take them long to merge with the front group, and while Tanner dropped away after looking visibly tired, it left a 15-strong leading group as the race headed through Abergavenny to start the first of ten laps of the Mardy circuit.

Pedal Heaven had three riders in the break, but Max Stedman looked strong. Having chased hard to catch the leaders, 20-year-old Stedman was on the front again, doing some huge turns to try to keep this break away.

Solo attacks by James Gullen (Pedal Heaven) and Ian Bibby (NFTO) were quickly pulled back as the leaders powered around with eight laps remaining.

Then Tom Stewart (Madison Genesis) had a dig, and gained around 20 seconds before Adria Moreno Sala (Raleigh GAC) and Metaltek-Kuota’s Dan Fleeman tried to chase him down, while at the other end of the leading group Daniel Patten (Team Wiggins) and Rob Partridge (NFTO) seemed to be struggling to stay in touch.

Moreno Sala and Fleeman caught Stewart, and the trio ploughed onwards while the remains of the chasing group struggled along and were being closed down by the peloton.

Having caught the chase group, the bunch ploughed on hard in search of the three leaders with four laps left.

Matt Holmes (Madison Genesis) attacked off the front of the bunch and caught the three leaders, who then had just 18 seconds over the bunch.

Liam Holohan (Team Wiggins) then tried to do the same and attacked the bunch in search of the four leaders, but his effort was in vain as the bunch took him back.

As the bell sounded the leading quartet had little more than 75 metres over the bunch, who were driving the pace hard.

With four kilometres left the bunch caught the leaders, but Erick Rowsell (Madison Genesis) counter attacked just as it all came together.

However, his bid for solo glory was short-lived too as Lawless and Stewart caught him as they hurtled round the final lap.

In the sprint Stewart powered ahead, with Rowsell taking second and Lawless settling for third and securing enough points to preserve his orange Series leader’s jersey.

“It worked out perfectly in the end there,” said Stewart. “It was a difficult day, a very grippy circuit and one for diesel-type riders that can roll with the hard riding all day long rather than being punchy. I wasn’t too surprised at the way it worked out.

“Round here it’s difficult terrain and you don’t get too much of an advantage sitting in the peloton having an easy day. It’s hard being back there and you’re fighting with other riders all the time for position, but if you’re in the break it’s no more difficult.

“I was out there all day in different breaks, then when we got caught by the peloton with half a lap to go everyone looked in a right state, and I knew they had had a hard day.

“Erick [Rowsell] was already away on his own, so I went with Chris [Lawless] and thought we would be racing, but everyone had let us go – I guess they were all just pretty tired!”