Tom Moses (JLT Condor) raced to victory in the opening round of the Motorpoint Grand Prix Series - the RideStaffs Kermesse presented by risual – in Staffordshire on Saturday.

Run over 18 laps of a 5.4-kilometre course, the race was won in style by the 24-year-old from Keighley in West Yorkshire who showed his power when he won the opening stage of the Tour of the Reservoir in the Motorpoint Spring Cup in April.

And to cap a great night for JLT Condor, Russell Downing and Chris Lawless took second and third respectively. 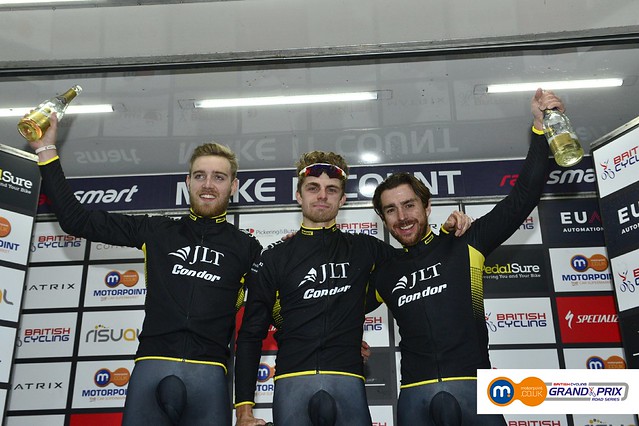 The first attack of the race came within a minute or so of the race start, and it was the green and black of Harry Tanfield, Pedal Heaven’s 21-year-old British University Road Race Champion who had a dig.

But as the race completed the first of 18 laps of the 5.4-kilometre circuit, Tanfield was reeled back in by the bunch.

Second lap and the second attack, consisting of Raleigh GAC’s Andrew Hawdon, Madison Genesis rider Tobyn Horton and Kieran Simcox (Neon Velo), and they soon had a gap of 30 seconds over the bunch – with Spirit Bikes’ Ed Clemens dangling in the middle as he tries to bridge across.

Madison Genesis gathered on the front of the bunch and the pace picked up, ending Clemens’ hopes of joining the leaders, and it wasn’t long before the race was all back together with the leaders finally being pulled back at the end of lap five.

After a few laps together the bunch allowed a small break of six riders to gain up to ten seconds, but they too were pulled back in as the race passed half distance.

With ten laps still to tackle, Tom Moses (JLT Condor) launched a brave solo attack, and caught the bunch napping with its ferocity. He gained 18 seconds lead in the space of half a lap, and after two laps alone he was 1-11 ahead and gathering pace, travelling at speeds of up to 37mph on the flat.

His lead fell away to around a minute at one point, but a turn of great power on the climb saw it jump back out to 1-38 with five laps to go.

With four laps to go the bunch galvanised their chase with NFTO and Pedal Heaven prominent. But Moses’ lead was hanging around a minute and a half and it would take a big chase to hunt him down.

Madison Genesis took their turn on the front as the bunch tried to hunt Moses down, but the lone leader was giving it everything, reaching speeds up to 40mph at times.

Ten kilometres from the finish and Moses still had a lead of around 1-25 over the chasing bunch, but the pain was showing as he ploughed round the course twice more.

As he passed the finish line for the final time, Moses took a drink and powered on, and with the gap still at around 1-30 it was hard to see who would catch him.

On the final climb Moses dug in one last time and powered up to take the win, while behind him his team-mates ensured a clean sweep of the podium with Russ Downing second and Chris Lawless third.

“I’m pretty happy with that,” said Moses with typical understatement. “We need to win a few races to make sure we get in the Tour of Britain.

“When I first went I thought it was stupid and that I would never stay away, I just imagined John [Herety] telling me off when I got caught with three to go and went out the back!

“I’m feeling confident, my aim for the second half of the year was to win one of these rounds and I’ve done it in the first one, so I’ll have to go and win another one now!”