British Cycling has announced the appointment of Professor Tony Purnell as Head of Technical Development for the Great Britain Cycling Team.

Tony, who has enjoyed a successful career in motor sport, will work across all aspects of technology – from improving data analysis to assisting the coaches with the development of organisational software and tools to optimise rider performance.

He will work alongside Chris Boardman, who will continue to act as a consultant for the Great Britain Cycling Team. 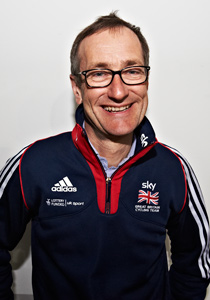 “British Cycling is an exciting organisation to work for – their elite performance record is as good as any in any sport, it’s a tough challenge to maintain such a standard, yet alone better it, but that has to be the goal,” said Tony.

“I intend to spend the next two or three months meeting the people across all areas of the team and understanding what has been done in the past.

“After that well I just hope to be able to suggest a good direction for the future that delivers the goods.”

After studying Mechanical Engineering at Manchester University in the 1970s, Tony won a prestigious Kennedy Scholarship to the Massachusetts Institute of Technology for his Masters. He then returned to the UK as a researcher at Cambridge University where his focus was on wind tunnel analysis software. Tony founded Pi Research which made race car performance analysis tools and control systems.  This was bought by Ford Motor Company in 1999 and was later made part of Ford’s Premiere Performance Division still under Tony’s management. In late 2002, Tony was made the Team Principal of the Jaguar Formula One Team. From 2006 - 2010, Tony worked as a Technical and Strategic Adviser for the FIA, the governing body for motor racing.  He is now a Royal Academy of Engineering Visiting Professor at Cambridge University and will continue in his role on a part time basis alongside his cycling duties.

He is a keen cyclist and recently won his first competitive road race as a fourth category rider, the Fleche Welwyn.

Speaking of the appointment, British Cycling’s Performance Director Sir Dave Brailsford said: “We are very fortunate to have some of Tony’s experience and ability to work with the riders and coaching staff.”

“We know that sustaining success is among sport’s greatest challenges and the recruitment of Tony is a significant step on the road to Rio.”

For more information about how to get into cycling visit www.britishcycling.org.uk/getinvolved