We look at the team, the course and the opposition ahead of the Olympic Women's Road Race.

The Women’s Olympic Road Race takes place on Sunday 29 July, starting at 12 noon on The Mall. Sixty-seven riders from around the world will tackle the 140 kilometre race, which rolls south out of central London, across the Thames into Surrey, tackling two laps of the Box Hill loop before returning to London for a grandstand finish on London’s most famous avenue.

Great Britain approaches the women’s road race with a strong team and in a rare and fortunate position – with proven winners able to capitalise on a number of likely race scenarios.

Lizzie Armitstead has had a strong build-up to London 2012, finishing 4th on general classification in the Internationale Thüringen Rundfahrt der Frauen, which ended exactly a week prior to the women’s road race – a clear indication of her race fitness and current form. The 2011 National Road Race Champion has been firing on all cylinders throughout the season, with early wins in Omloop van het Hageland and the classic Gent–Wevelgem strong indicators of her form in one-day races. From a GB perspective, the smart money is on Armitstead if the race comes down to a bunch sprint.

Nicole Cooke, the reigning Olympic champion, is the team’s most experienced rider, whose ability to close out a race from a break needs no introduction, following her epic win on the rain lashed Beijing course in 2008, a year in which Cooke was also crowned world champion. By her own admission, Cooke’s form hasn’t been ideal in 2012, but the 29 year old from Swansea is confident that she’s hitting form when it matters. Throughout her illustrious career, Cooke has always had the ability to rise to the big occasion, a point backed up by team coach Chris Newton at the team holding camp in Surrey: "In past big occasions, Nicole does raise her game and she's such a competitor. She can really cause some damage in that race.”

With much media attention on Cooke, Armitstead and the thorny issue of team leadership, it’s easy to forget that the women’s road team contains four aggressive, attacking riders with potential to launch attacks and scatter the focus of the opposition.

Emma Pooley, although focussed on the Time Trial a few days later, has had a stellar season with a 2nd place on GC in the Giro d’Italia the highlight. Pooley, a former national road champion, world and national TT champion also notched up 2012 victories in Durango-Durango Emakumeen Saria and Emakumeen Bira. In an unpredictable race with firm favourites heavily marked, Pooley’s threat cannot be ignored.

Lucy Martin has been billed as the likely lead-out for Armitstead if the race comes down to a bunch sprint on The Mall, having fulfilled that role throughout the season for Lizzie in their trade team guise. However, the 22 year old from Merseyside represents a threat in her own right, having been nurtured by British Cycling’s Talent Team, Development and Academy programmes since the age of 15.

Ultimately the GB team’s best hopes lie in keeping its approach opportunistic, with the luxury of having two potential leaders in Armistead and Cooke, capable of taking advantage of the two likely endgames. Factor in Pooley and Martin, also capable of causing damage in a peloton of heavily marked team leaders and Great Britain’s hopes are high. This point was hammered home by Lizzie Armistead at the Surrey holding camp: "For us it's fairly obvious that the best option is an open tactic," the 23-year-old from Otley said. "We'll race the race aggressively, because that suits us all.” 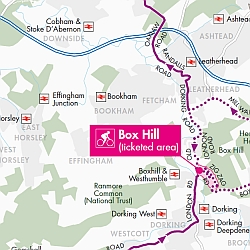 The women will race 140km on the London 2012 Olympic Road Race course. The event will begin on The Mall, before the riders head south-west through the city. They will then cross the Thames at Putney Bridge and continue out through Richmond Park and past Hampton Court Palace.

For the women the Surrey section of the course incorporates two circuits of a challenging loop around Box Hill before the riders head north through Leatherhead, Esher, Kingston, Richmond Park and back to The Mall for a dramatic finish.

While Box Hill’s gradients have been touted as critical in the men’s race, with the riders hitting it nine times in quick succession and fatigue becoming a real issue as the race progresses, Great Britain’s women see the ticketed Box Hill section as less critical in the race’s classically unpredictable narrative. However, speaking at the Surrey holding camp, the team are wary of attacks on Box Hill and anticipate that the sound of the crowds on the hill on Sunday are likely to drown out the telltale “click, click, click, boom” of a rival attack.

With no race radio allowed and communication during the race difficult, the Olympic road race is notoriously difficult to predict. The only certainty is that in the past, in both the men’s and women’s events, standout team leaders are heavily marked, playing into the hands of GB, with their likely adoption of an open, aggressive and opportunistic tactic.

Going on form alone the Netherlands’ evergreen Marianne Vos is top of the list of threats, winning the general classification, the points classification and five stages of the Giro Donne in 2012. Vos’ latest win came in the Tour Féminin en Limousin, with the Dutch rider, a former world champion on the track, road and in cyclo-cross, winning on GC, points and taking two stages along the way. Vos will be heavily marked but will be flanked by Netherlands teammates Loes Gunnewijk, Eleonora Van Dijk and Annemiek Van Vleuten.

Judith Arndt heads up the German threat and comes to the race with similar form to Vos, winning the Tour of Flanders, the Emakumeen Bira and most recently the Thüringen-Rundfahrt stage race. Arndt is joined in her German team by Claudia Hausler, Ina Teutenberg and Trixi Worrack, the latter both fresh from stage wins in Thüringen-Rundfahrt.

Of the rest, perhaps the best outside bet is Sweden’s Emma Johansson whose run-in to the Olympic road race included a podium finish in Thüringen Rundfahrt and fifth overall and a stage win the Giro Donne.

The race will be broadcast live on the BBC. Check out http://www.bbc.co.uk/sport/olympics/2012/sports/cycling-road/events/womens-road-race