British Cycling has today announced the long-listed team of riders who will represent Great Britain at the forthcoming UCI Road Cycling World Championships taking place from the 19 - 25 September in Copenhagen. 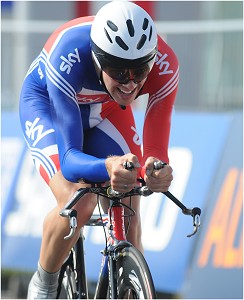 Mark Cavendish, who brought his Tour de France stage win tally up to 20 this year as well as winning the Green Jersey overall, will be supported by seven British riders selected from the long-list who will be looking to replicate their recent victory at the Olympic Road Test Event. Bradley Wiggins has been named on the Time Trial long-list, along with 2010 Silver medallist David Millar and Alex Dowsett (pictured right) who won the Gold and Silver medals respectively in the 2010 Commonwealth Games Time Trial.

Performance Director Dave Brailsford said: "This is the biggest team we've taken to a Road World Championships demonstrating the continuous progression of road racing in the UK. It's great to see the positive impact that Team Sky has had on young developing riders, with Geraint Thomas, Chris Froome, Pete Kennaugh and Alex Dowsett all being long-listed.

"We are heading to the Road Worlds with serious aspirations this year. The long-listed team will be narrowed down over the next week, and everyone on the team - both riders and support staff - is excited about the event."