A weekend of racing in Belgium saw the Great Britain Para-Cycling team come away with some valuable qualification points for London 2012. 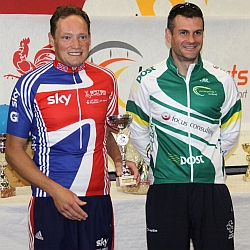 Oupeye, near Liege is in the French speaking part of the country but the Belgian Para-Cycling Open was a typically Flemish affair. Rutted roads, tight, unswept corners, mud and of course, rain. Race Officials appear and set up barriers, PA system, signage and start ramp, all within an hour of the start.

Saturday's 7.5 KM time trial was on a rough, twisting circuit, still holding surface water from the torrential rains that had swept across the country on Thursday. The Great Britain squad was especially cautious, world champion David Stone had crashed heavily whilst training on the course the previous day. Stone suffered cuts and bruises and after a visit to the Hospital decided to withdraw from the event. The patched up trike rider flew home early but expects to be back in training this week.

Despite their cautious approach the GB team still delivered. Shaun Mckeown clocked 12.58 to win the MC3 category, Simon Price won the MC2 with a 13.25 and Crystal Lane posted a 14.25 time to win the women's C5 category. Mark Colbourne clocked 14.02 for second place in the men's C1 Class. Price, Lane & Colbourne are relatively new to the squad and lack race experience. However, all three performed well in testing conditions.

Hand Cyclist, Karen Darke recorded 19.23 for a comfortable win in the HC2 category. The following day's road race was based on an industrial estate, it may have lacked glamour but it did produce some exciting racing. The 2.6 mile circuit included a couple of uphill drags, steep enough to force a selection and heavy rain in the morning had left the roads "greasy".

Thankfully the rain had stopped by the time racing got underway and once again the Great Britain team shone. Crystal Lane rode unchallenged to win the women's C5 title, the combined time of TT & Road Race deciding the result. Lane looks a real talent, she lacks experience but that will come. Simon Price rode strongly and always looked in control of the small breakaway he had helped establish. Price clipped away in the finale to win alone.

Shaun Mckeown rode a clever, tactical race. Protecting his lead from the time trial, Mckeown kept a watchful eye on his rivals, riding down any who tried to get away. Mark Colbourne came second in the C1 category, Colbourne, like Lane, is on a steep learning curve and responded well to the competition.

Tandem Pair Lora Turnham and pilot Louise Haston struggled to get on terms after Haston unclipped her pedal on the start line. The pair chased hard but never made contact with the fast moving bunch. Their disappointment, after a lonely race, clearly showed how much it mattered. Hand Cyclist Karen Darke built on her lead in the TT, to win her race and the overall. Strong arms and gritty determination is the key.

Coach, Jayne Ellis said "It was a good solid performance from all the squad and we are now looking forward to the final preparations for the world championships". Road coach, Tom Stanton agreed with Ellis, "We had good results on a challenging course and with a little over two weeks to go to before the Para-Cycling World Championships in Roskilde. We can now focus on the final preparation to make sure everyone is in the best possible form."

The nine rider squad had traveled to Belgium from a Paralympic simulation camp in Bath. Designed to give athletes a foretaste of life in the London Paralympic village, the camp included all the support and back up systems that competitors will find at the London games. No detail was left out, right down to a mock up of the accommodation facilities including a "2012" themed duvet! The simulation camp also served as a mini training camp for the Para-Cycling team, ahead of the Word Championships in Roskilde, Denmark next month.