Great Britain’s Lizzie Armitstead chased down the leaders to finish fifth but found the gruelling slopes of the Vista Chinesa took their toll leaving her with too much deficit to make up.

The Dutch could have had a different winner on the podium but race leader Annemiek van Vleuten suffered a crash on the final descent, which left her unable to finish the course.

Road world champion Armitstead said: "I would have put some money on Anna to win this race, she's a phenomenal athlete and this course was designed for her, I'm really really impressed.

"I'm proud of the effort I did, I stuck to my tactic, I needed to limit my losses on that climb and that's exactly what I did, I couldn't have climbed any faster. I'm happy with the tactic I had, I just simply wasn't good enough at climbing.

"I feel good, it was a victory to be here for me. It's been a very difficult couple of weeks but I'm happy that I was here to represent my country.

"I knew that I was going to need a miracle to come away with a gold medal on this course; I came up short on the climb and that's what I've been working very hard on but that's sport, that's what it's about."

There was early drama for the British riders as Armitstead received a puncture to her tyre within the first 10km and was forced to stop for a bike change.

Pooley meanwhile had dragged the peloton up the first climb of the course, leaving Armitstead to chase the pack on her own.

The British team leader re-joined the peloton and soon afterwards Belgian rider Lotte Kopecky attacked off the front of the peloton and quickly developed a two-minute gap over the pack.

As the group reached the summit of the first of their two laps of the Grumari circuit, Ellen van Dijk, Giorgia Bronzini, Anna Plichta and Trixi Worrack out-descended the rest of the riders and gave chase to Kopecky.

The breaks between the leader, chase group and peloton were reduced to 40 second gaps as the race entered the second loop of the Grumari circuit.

The Belgian rider was caught with 67 kilometres still to ride, as the chase group came upon her on the second ascent of the energy-sapping climbs.

A still-intact peloton completed the second circuit together, with lone French rider Audrey Cordon making her attack just as the race headed down to the sea road and turned back towards Rio.

With less than 38km to ride, German rider Worrack attacked off the front of the peloton and was joined by a small group including reigning champion Marianne Vos and French rider Pauline Ferrand-Prevot.

The group quickly established a sizeable gap over the chasing group on the flat coastal road but as they hit the slopes of the Vista Chinesa the peloton caught the leaders and the best climbers took to the front.

As the brutal climb splintered the peloton, four riders went over the first summit together, avoiding the ditches that scuppered many of the male riders on the previous day’s race. 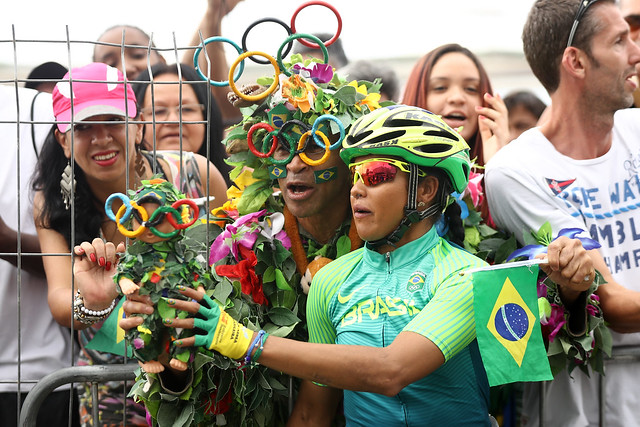 In the leading group, Annemiek van Vleuten hit the second climb of the Vista Chinesa, put on an extra burst of speed and left all but USA rider Mara Abbott floundering.

Van Vleuten made a break from Abbott on the Vista Chinesa descent, which had seen several leading riders come off their bikes in the men’s race, but she too crashed out of the race on one of the tricky corners.

Abbott then hit the final flat 10km out in front alone and rode bravely, though clearly tired, as the trio of Anna van der Breggen, Emma Johansson and Elisa Longo Borghini bore down on her.

With less than 500m to go, Abbott was caught and finished an agonising fourth while van der Breggen sprinted to gold and retained the women’s road race title for the Netherlands.