Harry Tanfield (Pedal Heaven RT) boosted his hopes of victory in the British Cycling Elite Circuit Series when he powered to a commanding victory at the Chepstow Grand Prix on Wednesday evening.

The 21-year-old from Middlesbrough was fourth heading into the fifth round in Chepstow, but took maximum points after breaking away early in the race with team-mate Alex Paton and steaming on to victory.

Tanfield is still fourth, but is now just 24 points off English, instead of 46 prior to the Chepstow Grand Prix. 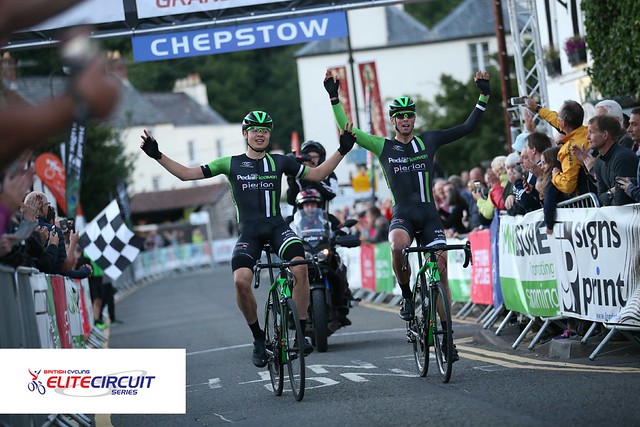 Pedal Heaven were the first team to push seriously on the front of a fast bunch at Chepstow, with Alex Paton and Harry Tanfield stringing the bunch out and leading to several riders dropping off the back each lap.

Lampier looked the most active of the four chasers and tried to pursue the two leaders, but their gap steadily grew to 24 seconds by half an hour of racing gone.

Paton and Tanfield continued to plough on impressively fast, lapping in around 1-40, and with the bunch 59 seconds behind and around 20 minutes of racing left, the possibility of them lapping the bunch was looking more realistic.

However, with four laps to go the pair eased off, with Lampier 39 seconds behind, the other three chasers 53 seconds off, and the bunch more than a minute back.

With two laps left, the Pedal Heaven duo steeled themselves for the finish, while Ali Slater (JLT Condor) attacked from the bunch to join the chasers who were surely battling just for minor placings.

As they approached the finish, Tanfield took the win with Paton not contesting the sprint, thereby giving Tanfield maximum points and boosting his tally in the British Cycling Elite Circuit Series.

“Raleigh got on the front early on and started ramming it, and I got on with them. Next thing I knew they were getting blown out of the back and I was on my own,” said Tanfield.

“I thought Liam was going to come with me but he got dropped on the descent so I just kept riding and hoping a group would come across. I could see there was a group chasing behind and it was in pieces. I heard Alex behind and he told me to keep going and got my wheel and next thing we were doing a two-up!

“The support here in Chepstow was great, fantastic noise and a good atmosphere! Now we’ve just got to get rested up for Abergavenny on Friday.”