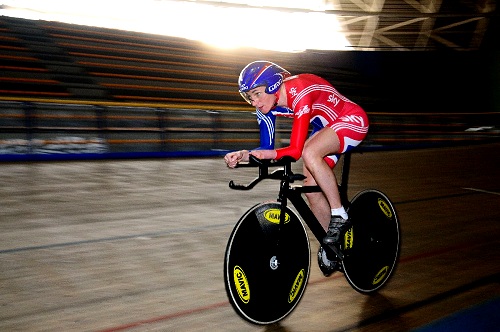 Sarah Storey is to become the first ever woman to gain a place in the Great Britain Para-Cycling Team Sprint squad, the rider revealed in a recent blog entry.

Updating fans on her website www.teamstoreysport.co.uk after an intensive week of trials and training in Newport, Storey revealed that through her efforts in the trials, she had made the grade to represent GB in a mixed male and female team in the forthcoming Para-Cycling World Championships.

Speaking on her blog, Storey said, “Having worked so hard on my standing start for the Team Pursuit during 2011, I had been able to improve enough to be asked to Trial out for a position in a team that has been unbeaten for as long as I have been on the Para-cycling programme.” Despite her status as a multiple Paralympic medallist, Storey was nervous about making the grade; “It was a daunting prospect lining up alongside current world and Paralympic Champions, Darren Kenny and Jody Cundy as I was being asked to trial in both the man one and man two positions.”

However Storey pulled a sub 21 second opening lap out of the bag, good enough to secure a berth in the Team Sprint Squad for Los Angeles. Storey explained further the technicalities that have led to her inclusion in the squad:

“The event is officially for both men and women, and a recent regulation change has meant that Great Britain and probably many other countries in the world, have had to change their line ups. Previously GB have been able to field three men from the higher classification groups, but the regulation change has been put in place to try and encourage lower classifications into the event and as such riders with more severe disabilities. Female riders are worth one point less than their male counterparts and so when making up a team worth 10 points, it means that I am now worth only 3 points and therefore in direct competition with the men in the 3 point classification, C3.”

The news means that Storey may be competing in three events at the Para-Cycling Worlds and a possible total of five events at the Paralympics in London later in the year, as prospect that Storey relishes. However, Storey is mindful of the strength of the team around her and the reality that the team has to be able to adapt to circumstances; “There are at least 2 other riders in the wings, just a fraction of a second away from selection and as such these two will be named riders as the reserves for the team in Los Angeles. Given the regulations around the composition of the team, it is important the squad travel with enough options in case of injury or illness.”