Adela Carter reports on a packed weekend of racing in Belgium as she and a small contingent of predominantly young riders ventured over the Channel to sample the joys of continental Cyclo-Cross.

The washing’s on, the shoes are drying and I can feel my fingers again. It seems like a week has passed, but only 48hrs ago five Yorkshire juniors and a guest Lancastrian (building bridges with sport up here) were slowly thawing out from a rather brutal World Cup warm up race in Namur Belgium.

The trip was organised by the Yorkshire Cyclo Cross Association (YCCA) who take a select group of talented and dedicated young riders to Belgium each year. For a few of us it was our first time in the cyclocross homeland and although told of the culture shock, the appreciation of cyclists and the scale of the sport really was something else.

On the Saturday the youth and junior riders headed to a National C event in Lichtervelde whilst Nikola Butler and I were thrown in at the deep end at a GVA Trophy in Essen. Nicholas Barnes sent us this report of the youth and junior race which yeilded some great results for the Yorkshire contingent.

“Lichtervelde, in my eyes was an average Belgian course. It had quite a bit of road section (as they are allowed to close villages of to use the roads), it was flat and went across a cow field with a little mound as the only hill on the course. It was spiced up by the mud, making the corners slippy and generally making the course much more hard work. Travelling to the guest house in Oudenaarde, it appeared to be raining for 24 hours making the ground very wet. However, as if by magic the rain ceased as we reached the parking for the race. From then on the rain held off all day till about 6 o’clock. 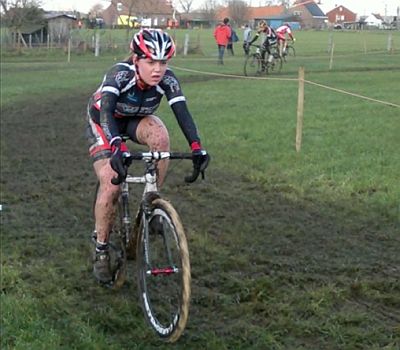 The competition was not too much more advanced than a field at a National Trophy. At the first corner it was a bit of a scrap as people were fighting for the driest line, I came together with a rider who was at least 6 feet tall who muscled me off of it. During the rest of the first lap I was making good progress through the field, all of us being gridded at the back, apart from Joe Moses who has gained UCI points so was on the first row. Unfortunately for me I crashed on the 2nd lap when I collected a wooden post in a tussle with another rider. This then lost me at least a minute and for me my race was over, but I didn’t stop trying as it is all good training. 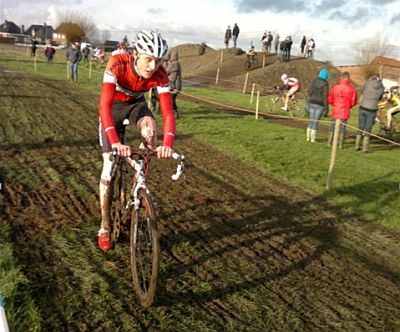 After the race we went to go get changed. Then jet washed all of the bikes and went to go get some chips and mayonnaise. When we got back to the youth hostel we all had pasta veginase (as Chris Young called it). This was well cooked by Nikola Butler as she had to cater for 16 people. I feel this trip has benefitted me as a person as it is a different experience, but the main thing for me is that the racing is a lot different. This is because the start does not let up until the end of the first lap, I felt this helped me build my speed for the races back home.”

After a 5am wake up on the Sunday and a snowy journey with the Junior Boys, the Namur race venue on the side of a hill was in stark contrast to our digs in pancake-flat Oudenaarde. This was Peel Park Bradford...on steroids! Following a practice lap the riders returned wet, cold and with a couple of shell-shocked expressions.

This course was nothing like those found in the UK. The constant elevation change looked exhausting, whilst the decents and off-cambers would require full concentration due to the steepness, roots and mud. Some of the sections would not have been out of place at a BMBS event and one decent would probably have had a warning arrow or two. More courses like this here would be great for the UK-based riders to hone their skills for battles on the Continent.

Warming up getting ready to race

With the temperature hovering around 1 degree C and the snow and sleet setting in, the race started under the traffic light system. The early climb really strung the field out and by the time they came through the pits clear gaps were appearing. The Brits were packing well and made up a few places on their gridding. A problem for Hugo Robinson who’d travelled over with his dad, meant he dropped down the field. However, a great chase saw him reel in riders and eventually finished first Brit in 10th. 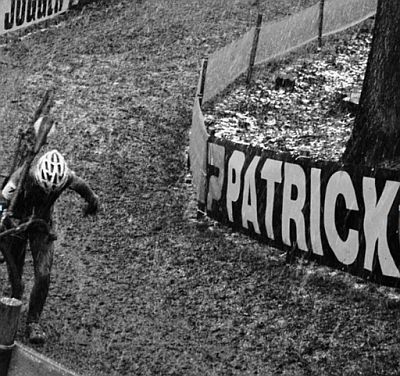 Good thing cyclists are made of stern stuff

Having 3 Yorkshire riders in the top 20 at this level of competition was a real boost to everyone involved. I’m sure the riders will take confidence and inspiration from this trip and use the experience well. It’s thanks to the YCCA, Keith Edwards Cyclo Cross Trust and the Dave Rayner Fund that the riders had this amazing opportunity. We must also thank Chris Young, Steve Barnes, Colin Humphreys and Ian McParland for organising the trip, giving up their time, taking on a mamouth amount of driving and being really supportive pit crews.