To compliment our report on the , Robin Fox has penned this excellent account of how Solihull CC youth riders Ethan Lee and Danny Fox got on at the same events, namely the GP Hasselt on Saturday and the Superprestige Gavere on the Sunday.

For first timers riding Cyclo-Cross in Belgium, the trip was all about experience and having fun in the races and sampling a crazy but strangely addictive way of life for a lot of Belgians.

The lads expected to be gridded on the back row of each of the youth races and they weren’t disappointed !! The F1 light system for the race start was quite impressive and as with all youth races, the tarmac start was fast and furious.

As the race progressed, both lads started to move up. As the race was only 30 minutes long, the danger is that a rider gridded at the back simply runs out of time before reaching his or her potential final position. Into the last 5 minutes at Hasselt, Ethan had moved up to 39th and was holding his position but Danny was in 18th place and had the next 3 riders in his sights.

These became the final finishing positions as the chequered flag appeared. The posse all stayed on in the afternoon to give Paul, Jack, Luke Gray and also Hugo Robinson a shout in their respective races. It was then a quick trip back to the youth hostel in Mechelen and then prepare for the Superprestige event at Gavere on Sunday. 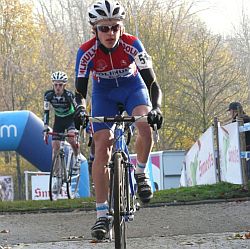 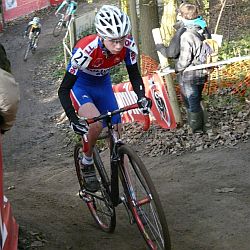 Ethan (left) and Dan in action in Belgium

As Jack Clarkson described, the course was completely different…the lads weren’t fazed though and were looking forward to more racing.

This time, they started at the very back of 60 plus riders and set about making up positions as the lights turned green. By the end of lap 1, both lads were in the groupd p contesting 25th to 35th places, though both had lost time to a mid-pack crash.

However, it was clear they were both riding better than Saturday and as Ethan moved into the top 30, Danny also started to eat up the ground and found himself tussling for 15th place on the last lap.

As the last half lap beckoned, Ethan was up to 29th place and Danny caught the 14th place rider and won a small sprint to secure his 14th place and a 5 Euro prize. The lads rode great races and learned a lot from the weekend….as did parents/coaches. It was a great experience for the lads who took a lot from the races in terms of future development.