Today’s races were held at the campus of Westminster College near to the centre of Oxford. The course was laid out over a couple of playing fields and a large wooded area which borders the college. 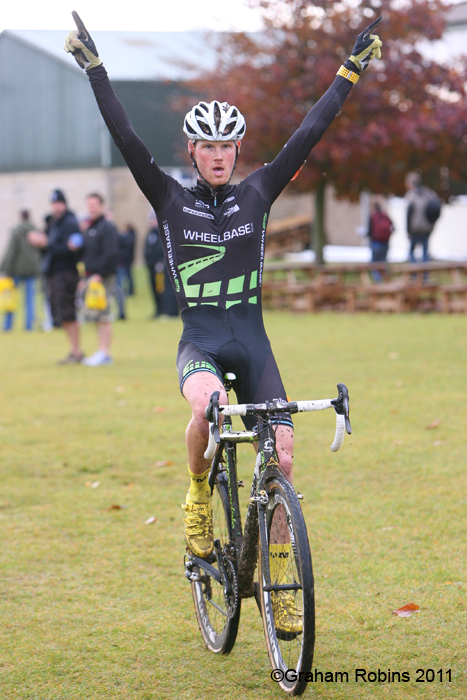 Michael Cotty takes victory in the fifth round of the Wessex League.

The morning started dry and windy, the grass was a little damp on top due to overnight rain, however the weather was to take a turn for the worse and rain came in for the combined Vet/Women/Junior race and this helped make to top surface very slippery in places. Although the rain had relented in time for the senior race there was still a damp feel to the air.

After a couple of laps Michael and Ben had extended their lead to over one minute over Peter with James slipping back and Jamie, Steve and James going the other way.

By mid way the race lead was Michael Cotty from Ben by 8secs with Peter Kench followed by Steve Knight and Jamie Norfolk. Both James Cotty and James Astbury had slipped back.

With a couple of laps to go Michael put in a couple of quick ones to increase his lead over Ben to over one minute with Steve Knight now a further three minutes behind.

Steve Knight was a good one as he asked to be seeded at the back and had worked his way to the front in only a couple of laps.

Just as the combined Veterans/Junior/Women’s race began the rain started to fall, adding sheen to the grass which caught out several riders.

After the run out around the fields the first to show at the front was junior rider Matt Woods (Hargroves Cycles) and vet rider Will Girvan (NHRC).

The first woman was Claire Smith (Swindon RC) with Sarah Woods (Wight Mountain) up next followed by Claire Galloway (Zappi’s).

Over the next couple of laps Matt and Will stayed away working hard to extend their lead. The next riders up were David Phillips and Peter Hutchinson (Swindon RC) with next rider Robin Wilmott (GA Cycles) next.

As the two leaders came into the finishing area the chequered flag was waving, Matt was in front of Will and hence won the race however both riders had said they did not hear the bell and both looked quizzically at the finish line thinking they had a least a lap to go.

Just after the finish line the two riders spoke and said neither had heard the bell and were very surprised to see the flag. Will was magnanimous at the finish saying he was pleased to finish behind his younger counterpart and to collect full points for the veterans table.

The youth riders competed on a long course run the opposite way round to the younger riders.

After the first lap it was Jack Saunders (Swindon RC) who had pulled out a 25secs gap over Jack Phillips (Banjo Cycles). Next up was Tom Sewell a further 33secs down and then Edward Gronbech 22 secs behind them.

Jack Sewell continued to open up a large gap with Jack Phillips now drooping back. The minor places had not changed and the first girl was Bethany Taylor who had got passed Zoe Sheehan.

There was quite an interesting race within the race with four girls Bethany Taylor (BCDS), Megan Lewis (Palmer Park Velo), Bethany George and team mate Zoe Sheehan (Swindon RC) all quite close together.

At the bell Jack Saunders was all alone with Jack Phillips second. On the finish line Megan Lewis was just piped by Bethany Taylor with Bethany George also close by.

First to make a break in the Under-12/10 race was Bethany Lewis (PPV) who along with Harry Dridge (Southdown Velo) opened up a small lead. Close by was Erin Baker (Southdown Velo), also not too far behind was Ieuan Woods (Charlotteville CC).

On the second lap Bethany and Harry had pulled away and started working together, Ieuan had now passed Erin and Liam Sewell (Swindon RC) was the next rider up. Bethany made her attack on the last few corners pulling away from Harry who in turn was clear of Ieuan.

The next round of the Wessex League is at Thruxton Motor Racing circuit Hampshire on 20th November.