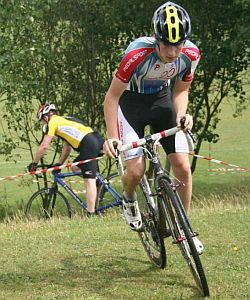 Pedalsport CC's Jack Clarkson (pictured) effectively wrapped up the over-14 series title as the Paul Milnes Yorkshire Cyclo-Cross Series reached round 8. The venue, Brigshaw High School, near Leeds, was intermittently drenched by heavy showers throughout the day, making conditions slippery on the grassy corners and steep bankings around the playing fields, on which the course is based.

Clarkson spoke afterwards and explained how the race unfolded at the front:

"The race set off with Mike Young leading out and by half way round the first lap a group of 4 had formed, including Mike, Chris Taylor, Simon Maudsley and myself.

With this group happily away out front, the riders began to take things tactically, just sitting on. Before long they was even some free-wheeling with us all looking at one another wondering who should take up the charge.

In the end I launched an attack, but then sat up and it all came back together. I went again with 2 laps to go and split the lead group, with Simon Maudsley several seconds back. Chris rolled a tub on the last lap, forcing him to run the last several corners loosing places."

That was Clarkson's seventh win out of eight events in the series this summer. First woman home was Nicola Butler in 23rd place.

Earlier, the Under-14 race was dominated by visitor Edward Fletcher of Cairngorm CC, with Jacob Feetham and Matt Taylor picking up second and third. First female rider home was Hannah Saville in fifth place.