Ian Field and Helen Wyman are ready to defend their titles at the British Cycling National Cyclo-Cross Championships in Abergavenny on 10-11 January.

Field approaches the nationals in great form after sealing the National Trophy Cyclo-cross Series in Derby the preceding weekend while Wyman is Great Britain’s leading woman in the UCI Cyclo-cross World Cup standings. And with strong competition in all categories, the Abergavenny venue is ready to serve up some memorable racing.

Twenty-eight-year-old Field is the standout competitor in the elite men’s category, dominating the 2014/15 national series while campaigning on the continent in the UCI Cyclo-cross World Cup, Bpost Trofee and Superprestige series.

Field took three National Trophy victories from six races, with a second place in the final round enough to seal a maiden series victory for the rider from Ashford.

Barring incident, it is hard to see anyone stopping Field taking a fourth consecutive British title, the first elite man to do so since Roger Hammond took a string of five triumphs between 2000 and 2004.

Behind Field is a gaggle of riders all capable of taking a podium place or capitalising on a problem for the reigning champion.

Liam Killeen always rides well at nationals and showed his hand at the final National Trophy round, riding through the field with a characteristic late surge to finish fourth. Olympian Killeen has graced the podium five times, with a handful of silver and bronze medals to his name, but has never taken the coveted champion’s jersey.

Field’s teammates Jody Crawforth and Steve James are likely to be in the thick of the action, as will Alex Paton, who pushed Field all the way in the national series.

Nick Craig rolled back the years in 2014 with a fine bronze medal and is a man who knows how to peak for the big event. Craig rode to victory in the veteran race before his third place in the elite men’s in 2014 and is in great form after a win in the veteran’s race at Derby.

The elite women’s race promises to be an intriguing battle with a fully-fit Annie Last joining the fray alongside established favourites Helen Wyman and Nikki Harris.

Last was the runaway victor at the final round of the National Trophy in Derby, riding away from the field and sending a clear message to her national championship rivals.

Having twice taken bronze in 2012 and 2013, the Great Britain Olympic Podium Programme mountain biker will be keen to add to the British cross-country mountain bike title she won at Hopton Woods in July 2014.

Last will however have to contend with an on-form defending champion Helen Wyman, the Kona Factory Racing rider currently sixth overall in the UCI Cyclo-cross World Cup.

Wyman will be aiming for an incredible ninth British title in Abergavenny, having won the jersey every year from 2006 to present, apart from 2013, when Nikki Harris broke her run.

Harris had a great start to the year, taking bronze at the European championships and securing podium finishes at the world cup. Harris’ mantle has slipped in the last two world cup rounds with a puncture denting her challenge in the pre-Christmas round in Namur but the Young Telenet Fidea Cycling Team rider is sure to challenge Wyman hard for the title.

Following Grant Ferguson’s resounding win at the final round of the National Trophy, few would bet against the Great Britain mountain biker taking his third straight under-23 title.

Ferguson took the national title in 2013 and 2014 and his form was evident in Derby, romping away from the elite men’s field and showing that his cross preparation is spot on.

Behind Ferguson, expect a resumption of the pitch battle between Ben Sumner and Jack Clarkson, the two trading blows all season in the national series. Twice a bronze medallist in 2013 and 2014, Sumner will be keen to go one better in 2015. 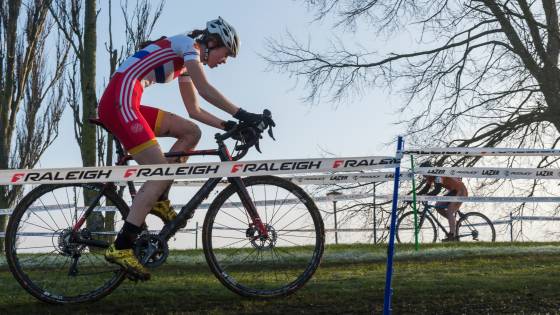 Junior champion Ffion James will return to home turf in Abergavenny to defend her title but will have to face the phenomenal Amira Mellor, who trounced the elite domestic field in the National Trophy, achieving a podium finish in every round.

The Paul Milnes Cycles – Bradford Olympic RC rider is favourite to take her first national champion’s jersey while James will face a tough competitor in Evie Richards, who took elite National Trophy victory in the penultimate round in Bradford.

Thomas Craig completed a memorable father-son double at the 2014 national championships, with victory in the junior men’s race after father Nick won the veteran men’s event.

A trio of podium finishes for Craig junior in the final three rounds of the National Trophy, with a win the series final, bodes well for a successful title defence.

Craig will however face a stiff challenge from Alfie Moses who took three straight wins on his way to the National Trophy title, while Josh Waters and Arthur Green are likely protagonists in the battle for the remaining podium spots.

Abergavenny is one of the UK’s premier cycle sport hubs, hosting numerous national championship and national series events across the cycling disciplines. The town is a favourite on the national cyclo-cross circuit, having hosted National Trophy rounds in three of the past five seasons.

Reports, images, results and reaction will appear on the British Cycling website.