Heard, who last took a National title in the under-19s some ten years ago, was becoming known as a nearly man but this title has put his name amongst the sport’s greats.

Heat 17 was the race whetting appetites long before the riders set off, a meeting between 3 previous champions in Mould, Myke Grimes, Josh Brooke and Heard that would be decisive.

Title holder Brooke didn’t have any luck in the heat - a quick start looked as though the Great Blakenham rider would secure the points but a crash between Mould and Grimes saw the referee bring all four riders back to the start.

Again, Brooke would be denied a potential heat win when the race was stopped a second time for a crash, this time between Grimes and Heard but it would be third time lucky for Brooke, a clean heat seeing him take the four points and the chance to retain his title.

With 2016 Champion Grimes rolling in last, the day would come down to a run-off between Brooke, Mould and Heard, all level on 18 points.

The title could have gone either way in the three-man race with Mould - who claimed the world title a few weeks previously and looked to be on top of his game – favourite but a tight race ensued.

Heard rode the track perfectly and couldn’t be passed; although Mould crashed on the final lap Heard had a big enough gap on Brooke to take the chequered flag alone.

Schmidt does it again

Poole’s Macie Schmidt made it three titles on the bounce with a maximum 20 points in the women’s race, claiming yet another Championship title.

Schmidt started the day as favourite and rode an impressive five heats to claim the title, albeit was chased hard by Leicester’s Liz Rigley who only dropped one point during the match.

Emily Burgess completed the podium to take third with 17 points, the A&T rider had the second spot in her sights but dropping 2 points in her last heat dropped her to third spot.

“I’m really happy about getting a third title and to do it with a maximum is really good,” said Schmidt.

“I really didn’t think I’d do it. I knew Emily was going to be a real threat but it didn’t happen for her with the draw.”

Ipswich rider Lewis Brinkhoff took a 20 point maximum to clinch the under-16 title.

Brinkhoff, who took second in the previous day’s match to Ben Clarke, made no mistake on a fast track to claim the victory and add to his haul of seven national titles.

Clarke took second, only dropping a point and that was to Brinkhoff in the fifth heat after a close race between the pair.

“I’m pretty pleased with that, I was hoping to do better in the juniors but that wasn’t to be so I wanted to beat Ben,” said Brinkhoff.

“I’ve had a good few weeks with the results at the Worlds and with this result I’m happy.” 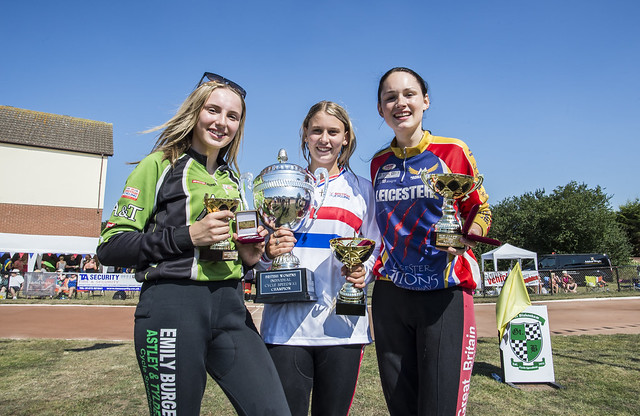 The men’s and women’s competitions will take place over the same four event weekends over the course of the season, with both taking place as geographically close together as possible.