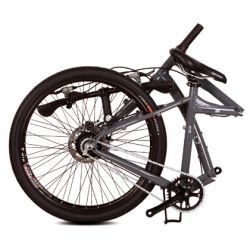 Say folding bike to a lot of people and they'll think of some frightening contraption that they're Mum used to ride, that looked and sounded like it would fold underneath her at the slightest provocation and that had all the kudos points of a rare communicable disease. Thankfully, in the last twenty or so years, things have changed beyond all recognition and, while it's still possible to buy a really bad folding bike, there are bikes out there that'll collapse in seconds into a package that will fit in a car boot or train luggage rack, yet will effortlessly and efficiently take you to work and allow you to use your bike in a way that you never thought possible. Some models will even let you hit the mountain bike trails, ride a century, or go off exploring the world.

What are the benefits?

Convenience - a bike that can pack down small can come with you anywhere - on the bus or train, in the car, on holiday - maximising your ability to snatch precious cycling opportunities. Also, folders, especially bikes like the Brompton or Birdy, which fold really small, are ideal for flat dwellers, where space is at a premium. Even in a large house, the ability to stow your bike in the under-stairs cupboard allows you to keep it safe, warm, dry, and ready to go at a moment's notice.

Multi Modal - A folding bike will allow you to combine cycling with other forms of transport like trains, allowing you to make quick, independent, door-to-door journeys faster than you ever thought possible. The possibilities for a cycle tourist are even more exciting. Imagine being able to easily hop on buses and trains in far flung locations, extending your range of travel way beyond your normal capabilities. Cycle touring purists may scoff, but if your primary goal is seeing the world rather than cycling every last inch, then a folding bike tour takes some beating.

Security - thoughts of your bike disappearing from the cycle rack are a thing of the past when you've got a folding bike, because in most instances, you can take your bike with you. Most compact folding bikes are small enough to sit unobtrusively under your desk at work. If I pop into the shops for bread and milk on the way home from work, I can fold up my bike and take it in with me. And of course, at home your bike can live in a secure location in the house, rather than in the less secure environment of the shed or garage. Another security point is that folders are a niche product that most thieves won't touch.

Environment - a folding bike is more convenient than any other type - fact. This means that you'll use it more and find more opportunities to replace carbon heavy journeys. Leisure cyclists can benefit too. If you are using a car to get to your destination, it is far more economical to stow your bikes in the car rather than on a roof-rack or rear-mounted cycle rack - check the difference in your fuel consumption next time you take your roof mounted bikes on a long journey.

What are the drawbacks?

Rolling Resistence - Of course, riding a folding bike isn't without its compromises. Many use smaller wheels, which are never going to cope with road irregularities as easily as larger ones. This can be partially alleviated by good tyres (the Schwalbe Big Apple being the folding bike equivalent of full suspension) or suspension, in the case of the Brompton, Birdy, Moulton and others.

Stiffness - compared with a diamond framed bike, can be an issue, though this varies immensely from model to model - best advice would be to test ride the bike of choice to make sure that the level of stiffness of your bike is an acceptable compromise.

Getting noticed - a fully grown human riding a small wheeled bike in a world of large wheeled bikes is always going to command attention from the local chavs. But don't let them be your transport gurus. Instead, steel yourself with the fact that, because you can take your bike into the shops with you, they won't be able to steal it (their delicate aesthetic sensibilities won't allow them to anyway)

Am I allowed to take my folding bike on the train?

Predictably, there is no country-wide consistent policy on taking folding bikes on train services, although they are far more acceptable than full sized bikes. However, many services (e.g. Docklands Light Railway) insist that your bike is bagged up, essentially making it into a piece of hand luggage.

Tips on buying a folding bike

Think about what you're buying it for. Think of a line with foldability at one end and performance at the other and decide where on that line your priorities lie. So for instance, if you're a regular train commuter and are sick to death of trying to cram your 700c wheeled hybrid onto the train at rush hour, something that folds small and is suitable for riding in normal clothes over shortish distances is what you're after.

If, on the other hand, you're an ultra fit roadie after a bike that you can pack into a small case and take with you on flights, then you can sacrifice quick folding in favour of a more efficient ride. There are bikes out there which manage to do both of these things really well. As mentioned before, there are also good quality folding mountain bikes out there that would serve you well on the trails, but fold in half quickly, so you can pop them in the boot. Here is a (by no means exhaustive) list of good quality folding bikes that fall into some of the categories mentioned above. 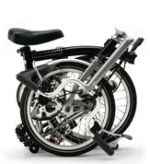 When a small and convenient fold is paramount

Brompton - designed and built in England and an icon amongst folding bikes - folds down fast into an ultra-small package that is incredibly portable, with the chain and other 'oily bits' on the inside. The folded Brompton is one of the only bikes that will fit easily onto bus luggage racks and inbetween seats on many trains, making it number one choice for those who value a compact fold above everything else. Bromptons also ride really well - indeed many have completed extensive tours on their 16 inch wheeled bikes. Many of the parts are manufactured in-house in Brompton's own factory, making the bike as British as it is possible to be these days. Available in a bewildering array of bespoke configurations. A bona fide design classic. Website

Birdy - slightly larger but similarly ingenious German design, with a far more modern look that the Brompton, with the benefit of full suspension. The Birdy is now in it's second incarnation, featuring a monocoque frame and a range of options including a Rolhoff hub equipped touring version. Website

Bike Friday Tikit - serious Brompton rival - the USP of which is the belief- beggaring five second fold, making the transition from cycling to sitting on the train magically quick. Not tried and tested like the Brompton, but an interesting prospect from an American company that make a large range of folding bikes, from off the shelf to full custom. Website

Dahon (16 and 20" wheeled bikes) - a huge range of bikes to suit every pocket, all of which fold fast and small enough for train usage, with everything from utility models to bikes you could ride a century on. There's even a touring model with dynamo, front and rear racks and a wide ratio MTB style gearing. Made by the largest manufacturer of folding bikes in the world. Website

When performance is more important than folding speed or folded size

Dahon 26" and 700c wheeled bikes - a range of bikes spanning the commuter and road segment. Website

Moulton - another icon of British design and manufacturer, designed by Alex Moulton, who designed the elastomer suspension system on the original Mini car, and first produced his revolutionary small wheeled bikes in the 1960s. Still produced in Bradford upon Avon today, Moulton's bikes are separable rather than foldable, meaning they split in two in a few minutes using an allen key, allowing you to stow them in your car boot. Moultons have taken their riders to the ends of the earth and to human powered land speed records, so don't think that a small wheeled bike is going to hold you back. However, Moulton's bikes are expensive and exquisite. To cater for a wider market, there are also versions of these revolutionary, full suspension, space-framed bikes produced under licence by British company Pashley, which use many of the trademark features of the Moulton design, in a more affordable package. Website

Off road fold? Yes you can

Dahon produces a foldable MTB called Flo, co-designed with input from Kona founder Joe Murray. There are other folding bikes that will easily handle canal towpaths and smooth trails, but (as far as we know) Dahon is the only company to offer a viable folding mountain bike in the UK.

Hopefully, this article has whet your appetite. If you want to find out more, there are sites out there that cover the whole subject in a lot more detail, with detailed reports, reviews and buyers guides.

www.foldsoc.co.uk - for reviews, buyers' guides and updates on all the major brands

www.foldingbikes.co.uk - the online presence of Bath's Avon Valley Cyclery, stocking the broadest range of folding bikes of any UK retailer.