With his air horn, 450 lumen light, 'Monkeylectric Wheel Light' and cheery disposition, Howard is an unmissable feature on Nottingham's roads. His favourite game? Beating out-of-shape roadies on his way to work at the City Hospital. 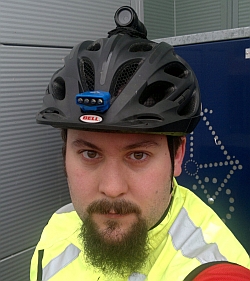 What’s your commute like? 9.7 miles ride each way on a mix of tarmac cycle paths and both minor and major roads.

How many days a week do you commute by bike? I’d like to say I commute 5 days a week every working week, however I tend to have 6 weeks off over the course of the year. Split between injury and mechanical failure. I’ve learnt though experience not to get back on the bike too quickly after pulling/straining something.

What do you enjoy the most about bike commuting? I enjoy the self-reliance; if I’m running late then I only myself (and maybe a head wind) to blame.

I also love statistics and data. I’ve a GPS (Sports-Tracker) and heart-rate monitor all of which I can match up with my helmet camera, boring to anyone else but it keeps me pushing to my limits.

What’s your least favourite thing about commuting by bike? It’d be easy to sound-off about bad drivers but in reality my least favourite thing is arriving in the dark, cold and wet. There maybe “no such thing as bad weather, just bad clothing” but when I get it wrong I end up in a pretty miserable state.

What are your main reasons to commute by bike? I cycle because it is cheaper and faster than going by car or bus. Occasionally I have to drive to work and I sit in endless traffic deeply jealous of all cyclists whizzing past.

Have you got any funny or interesting bike commuting stories or experiences to share? Most of my tales are of near misses and crashes (both seen and being part of). I like spring time with the days get warmer and the light levels increasing. After the first warm weekend we suddenly get all the out-of-practice road racers starting up again. I tend to sit behind them for a minute to get my breath back before sticking my stomach out and blazing past panting blokes on carbon bikes with my cheerful “Hello”. They soon return the favour once they are back in shape.

What’s your killer commuting tip? 99% of road users are nice people so; Be Happy! Without sounding too much like a hippy, I tried aggressive cycling for years but have now found that a smile, wave and friendly thank you will get you further.

I’m only a British Cycling member for the liability insurance and legal support. I’ve had to use their solicitors the last time I was hit by a car. I now recommend joining British Cycling to everyone I can. The discount with Wiggle.co.uk is a bonus.

Send us your Commuter Profile!

We want to know about your commuting experiences; how far you go, why you choose to ride, your killer tips and your commuter grumbles. Download, complete and email back your commuter profile to editor@britishcycling.org.uk and tell your story. Feel free to include a photograph/photographs of you and your trusty commuting bike!