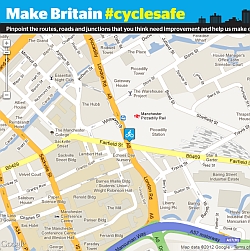 In the latest phase of its 'Cities Fit for Cycling' campaign, The Times has launched an online mapping tool, allowing web users to highlight dangerous junctions, one of the eight action points of the newspaper’s eight point #cyclesafe manifesto.

The online tool is available here and allows anyone to pinpoint dangerous junctions using a Google Maps interface, provide specific details on the nature of the hazard and sign up to the #cyclesafe campaign.

Urgent improvements in cycling infrastructure, as part of a shift which puts the needs of cyclists at the heart of transport policy is fundamental to British Cycling’s Road Safety policy.

Olympian Nicole Cooke highlighted her concerns in a recent letter to London's mayoral candidates; "If we want more and more people to ride their bikes we can’t have parts of the city where cyclists feel like they are taking a big risk just crossing a junction, it just shouldn’t be that way."

British Cycling urges you to visit The Time’s #cyclesafe page and highlight dangerous junctions in your area.